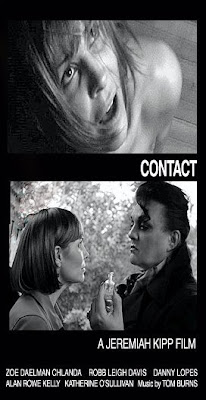 In this gorgeous and grim short film from director Jeremiah Kipp, two lovers (played masterfully by Zoe Daelman Chlanda and Robb Leigh Davis) score a drug from an underpass drug dealer and have an unpleasant and increasingly horrific trip back at their apartment.

From eerie opening scenes showing an older couple setting the table and waiting for a guest (I never thought setting a table could be so creepy!) to a beautifully framed shot of the couple as viewed through a window, Contact oozes sinister style.

From the beginning, it’s apparent the lead characters are going to be taking a strange journey, a la Alice in Wonderland. The drug dealer, played by B-movie cult figure Alan Rowe Kelly (who also produced), reminded me a bit of the Mad Hatter and the whimsical, old-fashioned bottles the drugs were stored in reminded me of the “Drink Me” bottles Alice encounters in the Lewis Carroll story.

There is a sense of foreboding and unease throughout the short, which only builds when the couple takes the drug. Dialogue is very limited, creating an even more surreal atmosphere, which is further developed with the freaky visuals of faces melding together and then stretching apart. The direction by Jeremiah Kipp and cinematography by Dominick Sivilli is stunning. The movie is filmed in black and white, giving it an artistic look, and Kipp creates a claustrophobic, paranoid atmosphere of confusion and vulnerability.

Besides the beauty of the visuals and the tension they create, the actors should also be commended for their terrific performances. As mentioned earlier, there is hardly any dialogue, so it’s up to the actors to portray their emotions and what they are going through solely through body language and facial expressions. Zoe Daelman Chlanda gives an absolutely amazing performance, filled with horror and vulnerability, and commands her screen time.

Contact is a stunningly sinister short film that is probably one of the best anti-drug films I’ve seen! It perfectly captures the horror of being trapped in a trip and the repercussions of drug use on family members. Reach out and make Contact today!

Watch the film on IndieRoar.com!
Posted by Sarah E. Jahier at 9:15 PM