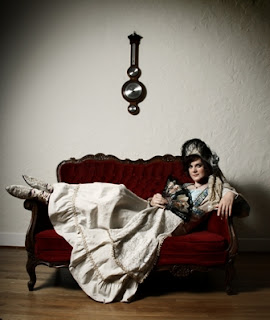 Lisa Hammer has been a prominent NY underground filmmaker for over a decade. She currently writes, produces and directs feature films with her brother James Merendino (SLC Punk!). Together the two are known as “The Terror Twins”. Lisa is best known for her dark German Expressionist films and experimental horror films and fairy tales, as well as the voice of Triana Orpheus on Adult Swim’s hit cartoon The Venture Brothers. She was also lead singer of the popular “goth” rock bands Mors Syphilitica and Requiem In White.

Her films have toured the U.S. and the world, winning awards and screening at one-woman shows, film and video festivals, art galleries, clubs, and on television. She has collaborated with Ben Edlund (Firefly, Angel) and Doc Hammer (The Venture Brothers), Chris McCulloch (The Venture Brothers), and directed the likes of: Courtney Love, Thurston Moore, James Duval (Donnie Darko), Clayne Crawford (Roswell), Lisa Suckdog, Queen Itchie and Dame Darcy, to name a few.

Her cult horror feature film Pus$bucket, from the Broadway Musical, caused a few near-riots and has recently been acquired by Arcanum/Warner Home Entertainment for widespread commercial re-release on DVD, as have her film collections Girls Gone Grimm and Best of Turn of the Century. The feature film version of her award-winning cult NYC TV show POX (starring an actual cult leader) is in post-production. Her surrealist-feminist film Period Piece about a mentally challenged young girl and her period, has been touring the world in festivals and one-woman shows for five years.

Her work can be seen on her web site: www.lisahammer.com and at imdb.com.

Lisa Hammer:  I have been terrified since I was child. I was born in Salem, MA, where the witch trials are still talked about every day. I remember visiting the Salem Witch Museum when I was five, watching the floor light up in a pentagram shape, and then a statue of the Devil glowed and shrieked, starting a terrifying wax museum tour of the true story of the torture and murder of innocent people. I was never normal after that.

Lisa Hammer: It means nightmares for a week. No, seriously, it could be anything from brilliant slasher films like Halloween and The Texas Chainsaw Massacre, to supernatural and psychological masterpieces like The Shining, and even the spectacular horrors of nature as in Jaws.

Lisa Hammer: I hang out with a lot of artists and intellectuals and they usually turn their noses up when I mention that I’m about to make a horror movie. But they all love The Shining. I tell them that The Shining is a horror movie. Many great directors have made horror movies. Then I tell them how much money horror films make in general and they usually grumble a little then shut up. I’ve been a starving art purist already, and I’m ready to move on.

Lisa Hammer: I don’t know exactly, but maybe it’s because it’s so gross to watch! I can hardly watch a really gory film. I get too scared. We girls see enough blood every month! Ha ha ha…I don’t think it’s because men are more violent, as some people think. I know some pretty sick women. Also it might be because many horror films show hot girls being threatened; guys like to think they can save all of us.

Lisa Hammer: The response from male fans to me and my work has been very positive. Men tend to think it’s really cool when a girl makes horror films. However, I am dealing with a lot of condescension from professional men in the industry, it’s really too bad because they could be working so easily with me on amazing projects instead of sticking to their traditional boring boy’s club.

Lisa Hammer: Horror may not interest women as much as films that center more on character development and relationships between people. I’ve seen many horror films that were just too simplistic to hold my interest. Or perhaps women have not been encouraged to make horror films. There should be mentors for sick women like me! I’ve heard that the fine people over at Darklight are helping female filmmakers create horror films, and Heidi [Martinuzzi] at Pretty-Scary has been extremely supportive of me and other female directors in this genre.

Lisa Hammer: I think women are really creative, imaginative and work so well in group situations. They are inclusive rather than exclusive. Men tend to be loners and alpha dogs fighting to keep their positions. Women have always gotten more done for me on my projects than men have, working together toward a collective goal. I think the women also bring more emotion and character development into scripts and films. Personally I would like to see more petticoats.

Lisa Hammer: Unfortunately, yes. Hopefully we will help change that.

Lisa Hammer: I have noticed a change in the whole industry, and everyones’ roles. Traditional routes of film production and distributions are being replaced by internet videos and downloads, and the ways in which we get our films are so different than before. Right now, anyone with an HD camcorder and some friends can throw together a cheap horror film and sell it for download. I don’t think gender matters so much anymore.

Fatally Yours: Dario Argento once said, “I like women, especially beautiful ones. If they have a good face and figure, I would much prefer to watch them being murdered than an ugly girl or man.” Alfred Hitchcock elaborated by saying, “I always believe in following the advice of the playwright Sardou. He said, ‘Torture the women!’ The trouble today is that we don’t torture enough.” What is your reaction when reading those quotes, especially as a filmmaker?

Lisa Hammer: I believe that we should torture more Scientologists.

Lisa Hammer: Traditionally throughout art history, the female form has always been more desired by the masses than the male form. Especially the dirty pillows.

Lisa Hammer: Anything in slow motion is either gorgeous or very funny to me. I am not desensitized at all. I am still extremely squeamish whenever I see blood and violence of any kind. The only things necessary in horror films (as any film) are things that truly add to the storyline and are not thrown in just for effect.

Lisa Hammer: Just keep making these films. It’s the only way to fight. I don’t care how people view me. I just keep going like a mad machine. It’s really fun making horror movies and grossing people out. I’m addicted to it.

Lisa Hammer: I am sad to say that I don’t really know many female film directors in this genre. I do admire Mary Harron and Julie Taymor, to name two. They aren’t afraid to be masculine and feminine, and to be highly creative, funny, very bold and shocking. I absolutely love Mary Harron’s American Psycho.

Lisa Hammer: Have fun. The guys might give you a hard time, but they’re generally really cute film geeks who like to have girls around. Blow their minds by being your own adorable self, AND by allowing yourself be that strong, smart, talented Valkyrie that you know you are! Don’t be too nice or polite, but don’t try to be a man either. Your femininity is your weapon. Take off that baseball cap and wear your favorite dress. In a friendly and joking manner, publicly humiliate the men that talk down to you, don’t be a victim and hold it in. Unless you’re a P.A….Then you can’t really complain too loud.

Lisa Hammer: I have heard that Paranormal Activity is boring. I won’t go see it. I fell asleep during The Ring. I left the theater during High Tension because it was just SO bad. Unwatchable.

Lisa Hammer: Films: The Shining, The Innocents, Jaws, Alien, all of the Hammer horror films. Too many to list. I love to read Poe and really any good ghost stories.

Fatally Yours: Do you have any upcoming projects you’d like to talk about?

Lisa Hammer: I work with my brother James Merendino (SLC Punk) and we recently won best feature film at the CMJ Film Festival for our dark, gory comedy The Invisible Life of Thomas Lynch (on imdb.com) and we are currently in pre-production for a girl-power-dark-comedy-extreme-gore-fest feature film The Bitch. This film will set new standards for over-the-top blood and guts punk rock filmmaking.

Lisa Hammer: I really have a strange need to make people throw up.