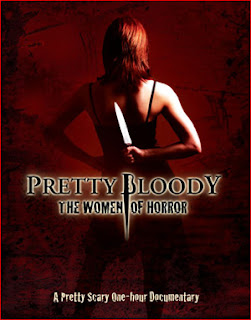 Pretty Bloody: The Women of Horror is a Canadian documentary that brings together some of the most articulate, intelligent and passionate women in horror to discuss their careers, experiences, hardships and views within the male-dominated horror industry.

Seeing a fresh female perspective on horror and hearing other women’s experiences within the genre was interesting and inspirational. As a woman, it is hard to find like-minded females who love horror as much as I do. To see so many respected and knowledgeable women within one documentary really confirmed that, yes, there are women out there who love horror as much as I do. It also shows that more and more women are getting into the horror genre, whether it is purely from a fan standpoint or pursuing a career in horror.

Also, the scope of careers within the horror genre that were covered, from actors to directors to screenwriters to authors to critics to special FX artists, was expansive and showed just how involved women are within the horror genre. It’s not just a boy’s club! To see so many talented women in all aspects of the genre really made me proud to not only be a woman, but to be part of the horror community!

Don’t get the wrong idea, though…even though I am basically singing this film’s feminist praises, there is enough in this documentary to engage all! Director Donna Davies crafted an entertaining horror documentary that will appeal to many different types of horror fans. Female horror fans will feel a kinship with the women featured in the film, while males will enjoy a new perspective on horror and everyone will like getting a behind-the-scenes sneak peak at what actors, writers, directors, critics and special FX people do on a daily basis.

Sorcery Films really did a wonderful job in releasing this documentary and I sincerely hope they pursue submitting Pretty Bloody to film festivals and conventions so more horror fans can enjoy it! I also hope it is eventually released on DVD because Pretty Bloody is one of the best, most superior horror documentaries and it deserves to be seen by all horror fans!
Posted by Sarah E. Jahier at 3:40 PM