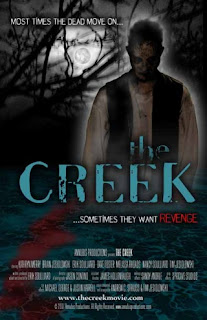 The Creek is a low-budget feature written and directed by Erik Soulliard. Fans of low budget horror thrillers will be glad to know that The Creek is a competent ghost movie with solid acting, a great score and excellent direction. Unfortunately, the overly-familiar story makes the film falter and it never truly becomes “scary.”

On the fifth year anniversary of their friend’s “accidental” death, a group of friends begin seeing his ghost. They all decide to return to the scene of his death, a secluded cabin in the middle of the woods, to find out why he has started haunting them. When they start violently dying one by one, they must figure out who, or what, is killing them off and why.

The standout performance in the film is by Kathryn Merry, who plays the smart and strong Angel character. Her performance pushed the film and the other actors to the next level, giving the movie a professional feel. The other actors all did a good job, but their reactions to friends’ deaths and the ghostly appearances seemed a bit wooden and unbelievable at times.

The story was pretty simplistic – a bunch of 20-somethings stuck in the woods while a ghost seeks revenge. Story-wise, The Creek brings nothing new to the horror genre. We’ve all seen this story many times in its many reincarnations. Still, the familiar storyline doesn’t necessarily make it a bad film…it just prevents it from being anything great or memorable.

The execution of the film is probably its most impressive feature. This low-budget film was shot entirely between sundown and sunrise. Shooting in the dark is a challenge, especially for low-budget films, but The Creek’s director Erik Soulliard and Director of Photographer Jason Contino managed to pull it off. With the exception of a few murky scenes, the audience can actually tell what’s going on. The lighting is realistic and unobtrusive. Most low-budget productions either under-light or over-light nighttime scenes, but most of The Creek’s scenes look spot on!

Another positive aspect of the film is the score, done by Andrew C. Strauss and Tim Jesiolowski, which lends a very professional and polished feel to the finished film. Even though the film is never scary, the score helps create an eerie, foreboding atmosphere in some of the scenes.

This is not a low brow horror movie filled with blood and boobs (thank God…haven’t we had enough of those lately?), so there’s not much gore to speak of, not that it needs much in the first place. The Creek does have many stabbings, with lots of bloody wounds shown, and these effects are done competently. Everything looks properly realistic and we even get a very cool impalement toward the end of the movie!

The Creek is a solid effort for a low-budget film. It has higher production values and better acting than most low-budget horror films, but I wish it would have aimed higher with its storyline.

Check out The Creek at www.thecreekmovie.com.
Posted by Sarah E. Jahier at 4:58 PM