Book Review: John Dies at the End by David Wong 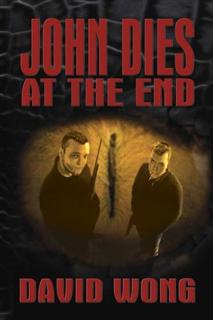 John Dies at the End is a hilariously frightening and frighteningly hilarious genre-bending book by author David Wong. It is a blend of comedy, horror and sci-fi that manages to mix alternate realities, creepy monsters and dick and fart jokes seamlessly!

There is so much going on in the book that I hardly know where to start with the synopsis. Basically, David and John are just two slackers until they become entangled in this weird, otherworldly drug called Soy Sauce. Most people who take it end up dead, but the side effects for John and David are much stranger. They start seeing things other people can’t see and get glimpses of other worlds. They find they have a special talent for solving “weird” cases like hauntings, monsters and other paranormal activity. David and John then realize that the strange things that have been happening to them (not just battling monsters and such, but loss of time and changes in reality) are all connected to someone (or something) named Korrok. They must figure out a way to stop this thing called Korrok before the floodgates to Hell are opened right under their little town. Throw in a meat monster, a giant, floating sea creature, lots of glowing eyes, a dog who can drive and a girl with a missing hand and you’ve got a vague idea of John Dies at the End.

This book was absolutely wild! From the moment I began reading I could not put the book down! (No, seriously, I think it was like stuck to my hand or something…) Wong tells his crazy story in first person narrative through David’s perspective. David has been contacted by a reporter named Arnie who wants to do a feature on him and John in regards to their paranormal investigations. So David relays his entire strange story, from beginning to end, to the reporter. The resulting narrative kept my interest throughout the entire novel and there wasn’t a second where I wasn’t entertained.

The tone of the book is very lighthearted and comedic, though some truly horrific events occur. David and John take these events in stride, even casually, which just makes the story even more amusing. Despite all the jokiness, there is some seriously disturbing and scary stuff lurking within John Dies at the End. Images of strange beasts and monstrous entities will probably haunt your nightmares after reading this book.

It’s also true what I said about so much going on in the book…it is packed to its slimy and otherworldly gills with a levitating, drug-dealing Jamaican, a Morgan Freeman-lookalike detective, a Mall of the Dead, a man made of roaches, crashing a Las Vegas séance, exploding body parts, Shadow People, other dimensions, portals to Hell, time travel, J.-Lo, a very odd dog and many, many hideous monsters. In other words, if you’re looking for something random, say, like a gigantic gorilla-arachnid hybrid, this book probably has it.

John Dies at the End is an action-packed and horror-filled book that spews hilarious and inappropriate humor at every turn.  The book could be compared to an acid trip, without having to actually suffer the side effects (ok, I lied; you’ll probably suffer nightmares). Besides wrapping humor and horror up together with a nice bow, John Dies at the End is a mind-bending and mind-enhancing book. Like the Soy Sauce, it’ll open up your eyes to a whole new world.