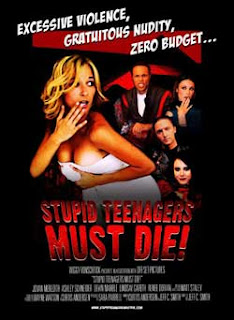 Stupid Teenagers Must Die! is a hilarious new low-budget film that simultaneously spoofs and pays homage to 1980’s horror flicks. This is a film that knows how to have a good time!

Set in the 80’s, STMD! is about a group of teens that decides to get together at an abandoned house that is supposedly haunted by “Murderer McGee,” a man who butchered his entire family in the house. They want to have a séance and summon the murderer’s spirit, just for a few kicks. All of the typical 80’s horror movie characters are here: the jock, the badass, the goth girl, the loser, the hero, the innocent girlfriend, the horny couple, the popular blonde girl and of course the two geeks. Soon, strange things start happening around the house and people end up dead as the spirit of Murderer McGee possesses each teen and has them kill those around them. Will the teens survive the night or will they learn that stupid teenagers must die?!

STMD! is one of the most fun and enjoyable low-budget films I’ve seen in quite some time. Director Jeff Smith (who also served as co-writer, cinematographer and editor) definitely shows his love of underappreciated 80’s horror films with this movie! Anyone who loves the cheesiness, preposterous situations, wacky and stereotypical characters of 80’s horror movies will definitely love this very tongue-in-cheek homage to the past. Smith says it best:


“With Stupid Teenagers Must Die!, we attempted to make a film with the fun and energy of the horror movies of the 1980’s. The trend of horror movies today seems to be torture and discomfort. Our goal was to go more retro and make a movie that has audiences yelling at the screen, laughing one minute, screaming the next, and do it all very tongue in cheek. We’re giving you the ‘greatest hits’ of 80’s horror movie clichés including the one dimensional characters, the excessive violence, the gratuitous nudity and the complete lack of budget. Movie snobs would look at these facets as unforgivable flaws in a film. We proudly announce these qualities on the poster!”

STMD! definitely lives up to the qualities described in the poster and then some. It has all the “excessive violence” and “gratuitous nudity” that is reminiscent of those entertaining 80’s horror movies we all love. I had a blast watching STMD! From the 80’s outfits that the stereotypical characters wear to the blood splatter to the goofy tone I just couldn’t get enough!

For a low-budget movie, the direction and the acting were all (surprisingly) top notch. Each of the actors does a great job, especially considering the fact that too much over-the-top acting could have ruined the movie. The talented cast of newcomers included Jovan Meredith as Kane (the hero), Ashley Schneider as Julie (the innocent girlfriend of Kane’s), Devin Marble as Alfie (the badass), Lindsey Gareth as Tiffany (the popular blonde), Renee Dorian as Madeline (the goth), Cory Assink and Jonathan Brett as the two geeks, Will Deutsch as Ryan (the loser), Jamie Carson and Christina DeRosa as Sissy and Jamie (the horny couple) and Matt Blashaw as Michael (the jock). Everyone does a wonderful job and they are all actors to watch, but the two that stole the show were Assink and Brett playing the two geeks. Those two had great comedic timing and I loved every second they were on screen!

Jeff Smith does a great job with the direction, cinematography and the script (co-written with Curtis Andersen, who also served as producer). The action looks sharp and even though this is a low-budget film, everything still looks great. Smith knows how to set up shots and the film quality is perfect for what he wanted to accomplish – a spoof of 80’s horror movies. The script is very well written by both Smith and Andersen, with clever references and hilarious dialogue that’ll have you rolling (in a good way!).

I cannot stress how much I enjoyed Stupid Teenagers Must Die! and highly recommend you check this film out. It recently played at the Backseat Film Festival in Philadelphia (garnering a few awards), and is now making the rounds at other film festivals. If you have the chance, go see it!

Order it on Amazon