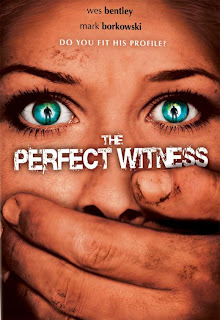 What was it that grabbed my attention and made me want to sit down and watch this flick? Well, it certainly wasn’t the crappy DVD artwork or the generic name (thought its other title, The Ungodly, is just as clunky-sounding). No, this film was in my queue for a long time before I realized that hunky Wes Bentley was in it, which shot it to the top of my must-see list! Yes, call me shallow but I’m a sucker for the blue-eyed, dark-haired actor and would pretty much watch whatever he’s in! While his scruffy, “independent filmmaker” look in this film didn’t do him justice (no offense to all the fab independent filmmakers out there!), I nonetheless found myself riveted to The Perfect Witness.

The story is about struggling documentary filmmaker Mickey (Wes Bentley) who plans to make it big by tracking down and filming an elusive serial killer. He finally catches up to his subject and films him brutally killing a girl. He then blackmails the serial killer, named James (Mark Borkowski, who also co-wrote the film), into being interviewed on camera in exchange for Mickey not turning in the video of James murdering the girl. However, the tables are soon turned as a tense cat-and-mouse game begins between the filmmaker and the serial killer.

Surprisingly, this film was pretty engaging! It’s definitely not a “perfect” film (hardy har har), but it is an underrated little flick. The use of hand-held camera footage actually works within the film and never once becomes annoying. Plus, the direction by Thomas Dunn is well done…there are several scenes that are nicely framed and he really captures the grittiness of the city setting. In fact, the dingy surroundings – back alleyways, dark apartments, etc. – really add both character and atmosphere to the film.

As for the story, penned by Dunn and Borkowski, it may sound similar to films like Henry: Portrait of a Serial Killer, but it has enough twists, turns and distinct characters to differentiate itself from other flicks. Though James, like many other serial killers, had an abusive upbringing, the film really takes a different direction with the backstory, bringing it to the forefront of film instead of using it as a convenient “explanation” as to why James is the way he is. I loved how his childhood demons came full-circle by the end of the film (in very surprising ways, I may add).

The chemistry between the characters of James and Mickey was spot-on – at first there was uneasiness between the two of them, then acceptance, then a tense trust and then…well, let’s just say that the turn of events is surprising towards the end. Bentley and Borkowski do a really bang-up job portraying their characters. Of special note is Borkowski, who just oozes danger despite his character’s penchant for charity work. He always seems on the verge, and when he finally snaps it is quite explosive!

Though there are some disturbing scenes of violence (one in particular involving a home invasion and subsequent murder of a waitress is particularly cringe-worthy), this is more of a psychological film than anything else. While this might turn off some viewers, I actually appreciated the slow build-up of the film and its increasing tension. The story, acting and direction kept me engaged, and the topsy-turvy ending was just icing on a very satisfying cake!

The Perfect Witness certainly isn’t the best thriller out there, but it was a surprisingly interesting film that kept my attention, especially with its strong acting and story, making it well-worth checking out.

Available from Amazon!
Posted by Sarah E. Jahier at 9:58 PM