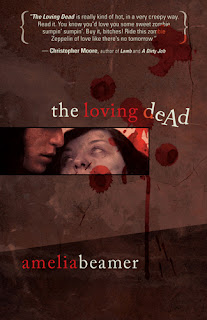 Every month I wade through a glut of zombie novels, some of them good, some so-so and some downright awful. From my towering books-to-review stack I recently chose Amelia Beamer’s The Loving Dead to check out. It sounded intriguing enough as a group of regular twentysomethings find themselves at the epicenter of a sexual transmitted zombie virus in San Francisco.

From the back cover:

Kate and Michael, twenty-something housemates working at the same Trader Joe’s supermarket, are thoroughly screwed when people start turning into zombies at their house party in the Oakland hills. The zombie plague is a sexually transmitted disease, turning its victims into shambling, horny, voracious killers after an incubation period where they become increasingly promiscuous. Thrust into extremes by the unfolding tragedy, Kate and Michael are forced to confront the decisions they’ve made, and their fears of commitment, while trying to say alive. Michael convinces Kate to meet him in the one place in the Bay Area that’s likely to be safe and secure from the zombie hordes: Alcatraz. But can they stay human long enough?

It took me a while to get into The Loving Dead, I think perhaps because of the first-person perspective that kept switching between Kate and Michael. However, about 50 pages in I fell into the flow of the novel and started to enjoy it. If you are from California, you will definitely enjoy the references to Trader Joe’s (I love this grocery store!) and readers familiar with the Bay Area will appreciate all the landmarks mentioned in the novel (The Coliseum, Alcatraz, Golden Gate, etc.). These details definitely added to my enjoyment of the book. However, just because you aren’t from California doesn’t mean you can’t appreciate The Loving Dead. Besides its witty and plentiful pop culture references (iPhone apps, Twitter, BoingBoing, Indiana Jones, blogs), it’s got sex, violence, romance, zombies and plenty of nail-biting action! Plus, it has an amazing conclusion that I definitely didn’t see coming.

The Loving Dead is Amelia Beamer’s debut novel and I’m excited to report that this is one of the “good” zombie novels I’ve read this past month. Despite a shaky opening I found myself thoroughly enjoying the unique storyline and loving the new approach to the zombie virus.

If you’ve ever wondered what it would be like to cuddle up with a zombie, look no further than the kinky The Loving Dead. It’s a hip and twisted new zombie novel that’ll have you all tied up!

Available from Amazon!
Posted by Sarah E. Jahier at 12:31 PM