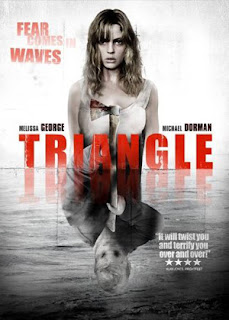 Triangle is a surprising straight-to-DVD flick…when I first watched it I hadn’t heard anything about it, so I wasn’t expecting too much out of it. However, it’s a great little flick that offers plenty of twists and turns that will keep your mind reeling!

I’m not even sure how to describe it so I’ll let the Netflix description do the synopsizing:

“Murder strikes the Bermuda Triangle in this gripping high-seas horror starring Melissa George, Liam Hemsworth and Rachael Carpani. Jess encounters the first of many bad omens when her car kills a seagull near the local harbor. Later that night, her yacht hits a storm, forcing her and her friends to board a mysterious deserted ship. The clock on the ship has stopped — and so has any sense of safety. Christopher Smith writes and directs.”

Though the synopsis mentions the Bermuda Triangle, it’s never explicitly mentioned within the film and the above synopsis doesn’t quite do the movie justice. When Jess (a perfectly manic Melissa George) and friends board the ship, a strange time loop occurs and Jess must essentially battle future and past selves to get off the ship. Ok, so it sounds a little hokey, but rest assured it isn’t! The film is played as straight as can be with plenty of shocks, suspense and scares! This is certainly one film that gets inside your head…even when you think you can relax Triangle surprises you with more twists and turns.

Christopher Smith, who writes and directs, did a fantastic job creating an ominous atmosphere, both within the story as well as with the visuals of the film. I really didn’t know what was going to happen and the script kept me on the edge of my seat the entire time! Also, the decrepit old ship was definitely foreboding, especially with its dark mazes of hallways and the washed-out color palate Smith used when shooting above-deck or on land. The visuals helped create a sense of disorientation that mimicked the emotions of Jess as she tried to figure out what was happening and how to stop it.

Along with messing with your head, the film also features some pretty impressive violence. People are shot, stabbed, choked, drowned and so on. This isn’t a “gore” film by any means, but I thought the amount of blood was quite appropriate for the tone of the film. It also boasts plenty of creepy scenes, like when a masked killer is going after Jess and her friends. My favorite scene? When Jess stumbles upon the duplicate bodies and bodies of her friend who, in this strange time loop, has died again and again and again and again…

I think it’s better to go into Triangle with little or no expectations, so I don’t wanna blab and give too much away. This horror flick comes highly recommended from yours truly…and just wait for a jaw-dropper of an ending!