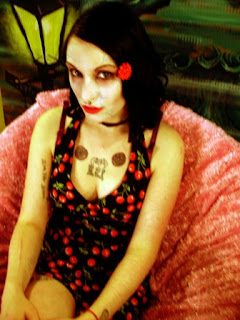 Aleata Illusion has been a horror movie fanatic for all of her 23 years and you could say her undying love for the horror genre comes more natural to her than breathing. Aleata Illusion has always wanted to be involved with the film industry and her passion for horror eventually developed into a love of writing and directing horror films. Aleata runs Maggot Mosh Productions and runs a horror movie blog called Gore Gore Dancer Reviews. She spends most of her spare time writing, directing, studying and collecting horror movies.

Aleata Illusion: I’ve been obsessed with everything horror for as long as I can remember. From scaring my sisters when I was little to being traumatized by Poltergeist the first time I saw it. I was just born with a disturbing infatuation with horror. I mean WAY before the movie Ginger Snaps came out, my mom was always yelling at me “NO MORE BLOOD IN THE HOUSE”!

Aleata Illusion: Horror is everything to me, it’s like Halloween every single day in my everyday life. What horror really means to me is something infinitely real and macabre that can happen at any given moment, and I am absolutely fascinated by it!

Fatally Yours: How and when did you start writing about the horror genre?

Aleata Illusion: Well when I was 12 I wrote my first horror script. It was an addition to the Friday the 13th franchise, extremely gory might I add. I actually still have it somewhere. Of course it was just scrunched together into a story, because I didn’t know the proper script layout, haha. From then on I’ve been writing gruesome scripts, short stories, and poems. Then probably when I was around 18 I started writing all my maniacal horror thoughts online on various different websites, and that led to me finally creating a blog of my own.

Aleata Illusion: I’m extremely proud of everything I’ve done. From my short horror/comedy movies to my horror blog.

Fatally Yours: How would you convince people who aren’t horror fans to give the genre a try?

Aleata Illusion: Tell them “don’t knock it until you try it”. But seriously I have friends who are not horror fans, and I’ve forced them to watch some of my favorite horror flicks with me, and some of them have fallen in love with certain movies. I feel I need to show the world what’s great about the horror genre with my movies, blog, and just me endlessly babbling about it to anyone who will listen. Knowing that I’ve changed people’s minds about it has made me happier than anyone could ever imagine.

Aleata Illusion: I realize that more men write in the horror genre, but you can easily pick out the women as well. I think a lot of women have really come up in the horror world. From actresses to bloggers, I think more women are starting to get noticed and discovered for their true talents.

Fatally Yours: As a woman who writes about horror, have you found it harder to be taken seriously in a genre that seems to be dominated by males?

Aleata Illusion: You know, I don’t really even think about it. I love what I write about, and do. Nothing is going stop me from writing, so it doesn’t matter to me. If someone wants to be immature enough not to take me seriously as a writer because I’m female, then that’s truly pathetic. Being the year 2009 though, I think most people are over that whole “women can’t write about horror” thing. I’ve always gotten positive comments from horror fans/writers.

Fatally Yours: Since you’ve been involved with the horror genre, have you noticed a change in women’s roles within horror whether it be roles in horror films, women behind the camera or women writers?

Aleata Illusion: I think there has been an explosion of women horror writers and I think it’s great! I come across more horror blogs run by women all the time. Of course women have always been behind the camera, but they’ve gone from the victims to the murderers more often. I do wish there were more women horror directors though.

Fatally Yours: What women in horror do you admire?

Aleata Illusion: I’m going to have to say my sister Tiara. She helps me come up with ideas for great horror movies, and also stars in every one of them, without her I’d be lost. I’m also a big fan of Misty Mundae, one amazing scream queen who doesn’t get enough recognition. Also all the female horror bloggers who are all so supportive and dedicated to what we all do.

Fatally Yours: What inspires, influences and motivates you to keep writing about horror?

Aleata Illusion: Just being me keeps me motivated enough. The feeling I get when I watch a good horror movie for the first time, my basic instinct to want to promote underappreciated filmmakers, and all the other amazing horror writers out there! Just getting feedback from people is still shocking, it’s like “wow I can’t believe people take the time to read my blog”. It’s a really awesome feeling, so that alone is a reason to share my horror movie madness with fellow fanatics.

Aleata Illusion: My favorite horror movies are A Bucket of Blood, Red Eye (the Japanese horror flick), Die You Zombie Bastards, Murder Party, and Terror Firmer. I love reading biographies and true crime books, but Undying Love and Torso are two of my favorites.

Fatally Yours: Outside of horror what do you enjoy doing?

Aleata Illusion: I love doing promotional work for bands, and going to shows. I love designing and making my own clothes, photography, playing video games, painting, and taking nature hikes. I’m a creative soul, and love to keep busy.

Aleata Illusion: I want to be a horror director. Not really so much a famous one, but one that will be recognized for creating original, gory, and insanely hilarious horror movies. I just want to be able to make horror movies for the rest of my life.

Fatally Yours: Where can people find your reviews/more info on you?

Aleata Illusion: If anyone would like to find more information about me they can visit these websites:
www.myspace.com/MaggotMoshProductions
www.AleataIllusion.blogspot.com
Posted by Sarah E. Jahier at 8:18 PM