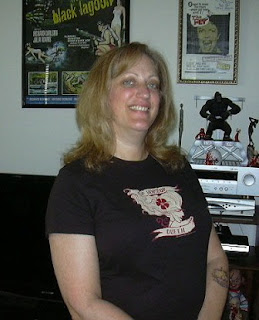 Debi Moore is a Tennessee native who developed a love for horror at an early age. Throughout high school writing was a major passion of hers – both short stories and poems. After graduating, Debi moved to Boston for a few years, but following the Blizzard of ’78, she relocated to the warmer climes of Southern California. As time went by and “real life” intruded, her fondness for horror and her writing activities gradually got pushed aside, but after meeting up with like-minded individuals on the Internet in the early 2000′s, she found her enthusiasm for both rekindled. With the caring and fervent support of these newfound friends, who are now like members of her family, Debi took the plunge and began writing again, only this time for public consumption. Her reviews, new stories, and other articles can be found on DreadCentral.com. Out of this endeavor was also born “The Woman In Black”, an everywoman of sorts who resides in the shadows and is drawn to the darker realms of the genre.

Debi Moore: It was at a very early age. My mom and I are both night owls, and during my childhood nearly every Saturday at midnight we watched our local “Shock Theatre” on TV while my dad slept. Movies like the original Frankenstein, The Mummy, and especially Dracula were significant influences. And then Alfred Hitchcock blew my mind with The Birds, which gave me the biggest scare of my life. From then on, I was hooked.

Debi Moore: It generally means something that can’t be explained. Something supernatural or not of this world. Sure, it can also mean your garden variety crazy human serial killer or some other dark and violent storyline that’s rooted in reality, but my preference is definitely the more unreal and surreal sides of the genre like vampires, ghosts, etc. And if it can still manage to make some sort of social commentary without being too heavy-handed, all the better.

Debi Moore: It’s all across the board. Some people say, “Oh, I can’t watch that stuff; it gives me nightmares,” and it never comes up again. Others are curious about what I like about it and ask for advice on what to watch and what to avoid. And then there are those who are just like me and can’t get enough of it. We can hang out and talk for hours. My favorite thing, though, is when I make people realize how many films they don’t consider “horror” that are actually among their favorites. They never stopped to think about what a truly broad category it is before.

Debi Moore: Because everything is primarily a man’s domain.  It’s a man’s world, and anyone who thinks otherwise is either very young or very naïve.

Debi Moore: Sure I’m viewed differently.  But no more so in the horror genre than in any other aspect of life. I don’t necessarily see that as a bad thing either. We’re all viewed and judged differently according to a wide variety of criteria. Sarah, who sent me this questionnaire, is also a woman. In some ways I’m sure we’re seen the same — a couple of chicks who don’t mind exploring the darker side of the human condition. Throw in a bit of the red stuff, and we’re happy campers. But then again, I’m quite a bit older than Sarah, so in that regard we couldn’t be viewed more differently. So it’s six of one, half dozen of the other. You do your best and use whatever the good lord and your genetics gave you in the way of smarts or looks or personality to get what you want out of life. And that applies to men as well as women.

Debi Moore: Again, it’s a man’s world. The boys’ club is alive and well in every business, not just horror. Plus, I think men are just naturally more drawn to the “business” side of the industry whereas women gravitate toward the more creative side. Notwithstanding that there are, of course, exceptions to every rule.

Debi Moore: Not if the women behave in a way that exudes professionalism and commands respect. The people in power in the movie business just want money in their pockets like everybody else. They really don’t care if it’s a man or a woman who puts it there. Provide a good product, and it won’t matter if you’re male or female.

Debi Moore: Not especially. Women were just as scattered throughout the genre when I started as they are today. There’s a wide variety of roles … plenty to go around among both men and women … and no rules to say who has to do what.

Fatally Yours: Dario Argento once said, “I like women, especially beautiful ones. If they have a good face and figure, I would much prefer to watch them being murdered than an ugly girl or man.” Alfred Hitchcock elaborated by saying, “I always believe in following the advice of the playwright Sardou. He said, ‘Torture the women!’ The trouble today is that we don’t torture enough.” What is your reaction when reading those quotes?

Debi Moore: I laugh a little, which then makes me a bit sad. We’re all so jaded today, especially when it comes to torture and violence.

Debi Moore: Maybe a little. But not so much now as I used to because there is more male nudity (or at least semi-nudity) in films nowadays. My rallying cry has always been “More Penis Please!”, and I think slowly but surely we’re seeing some progress.

Debi Moore: The first one that comes to mind is Hellbent, a fun little gay slasher that I reviewed a while back.

Debi Moore: Overall I may be more desensitized than the “average” viewer, but if a scene is written well, shot well, and acted well, then it can be as effective as it needs to be. I’m not beyond being scared … or moved … by something in a horror film. I’ve probably cried at least half as often as I’ve cringed.

Debi Moore: I think that’s kind of a passé view. Most men today realize that women can appreciate a good horror movie just as much as they can. And if they don’t, then they’re not people whose opinion I care about much anyway.

Debi Moore: I’ve always been a big fan of Elvira. She pretty much set the bar on how a horror hostess (or anyone in the public eye) should behave. I also admire Anne Rice (her books rekindled my love for horror after a bit of a dry spell), Mary Shelley (for obvious reasons), director Kathryn Bigelow, and the original tough chick Sigourney Weaver.

Debi Moore: Go for it!  But make sure you learn as much as you can about the parts of the genre that interest you the most, and never try to fake it about the rest.  Horror people can spot a phony faster than just about anybody.  And make sure it’s really what you’re most passionate about because if you’re only in it halfway, there are plenty of other people giving 110% who will blow you out of the water.

Debi Moore: I’ve seen a few: Inside, Paranormal Activity, Frozen (which is coming out in early 2010), and Coffin Joe’s latest, Embodiment of Evil. If you’ve never seen a Coffin Joe flick, you’re missing out. They are ALL effed up!

Debi Moore: I have to say Suspiria. When I first heard about it, I got really excited.  It sounded totally up my alley and seemed like the perfect intro to Argento and other Italian directors. Unfortunately, it did nothing for me. Yes, it looked cool … and for a while that was enough … but then it was all downhill. I’ve thought about giving it another try, but there are just too many other movies to explore and too little time.

Debi Moore: Anne Rice’s Vampire Chronicles and Lives of the Mayfair Witches are big favorites.  I also love the comic The Walking Dead. As for films, the list is long so here’s just a sample:  Carpenter’s The Thing, Halloween, Prince of Darkness, and The Fog; Night Watch/Day Watch; Irrefutable Truth about Demons; all the Romero Dead films; Frailty; Near Dark; all things Godzilla; the original Frankenstein and Dracula; The Signal; Ju-On series; Trick ‘r Treat, Uzumaki; Kairo; The Revenant, I Sell the Dead, Hard Candy; King Kong (original and ’05 version); Sleepy Hollow; and of course my namesake, The Woman In Black. As for TV shows, these are past and current faves:  Dexter, Carnivale, Epitafios, Lost, Twin Peaks, Supernatural, The Addams Family, Dark Shadows, Buffy and Angel.

Fatally Yours: What has been your most memorable experience while working in the horror community?

Debi Moore: Meeting Anne Rice at a book signing was pretty amazing (she has a knack for making you feel as if you and she are the only people in the room), but that was actually before I worked in the community. More recently I attended the first ever Reaper Awards, which the site I work for was a co-sponsor of. I’m a huge awards show junkie so it was pretty thrilling to walk the red carpet and have my boyfriend (Uncle Creepy from Dread Central) serve as MC of the event.

Debi Moore: To do everything I can to help ensure the success of Dread Central and make it the most kickass horror site on the Web. Beyond that, I hope people enjoy reading the reviews and articles I write as it’s what I enjoy doing the most and hope to keep doing well into the future.