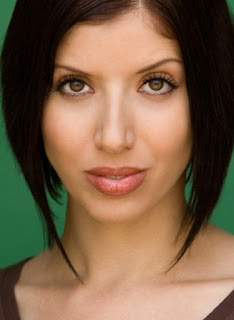 Bianca Barnett first slashed her way into the heart of horror with her fearless performance as the horribly mutated villainess, Pig Bitch, in 2009’s Albino Farm. Next, she portrayed Marlena, a drug-addled model who moonlighted as an organ thief in Ramzi Abed’s mind-bending thriller, In a Spiral State. Bianca made her film debut in Abed’s The Devil’s Muse, playing dual roles as naïve Rose, who moved to Hollywood with hopes of stardom, and the mutilated corpse of the mysterious Black Dahlia.

Currently, Bianca has five projects she is working on in 2010, including a cameo in Michael Colburn’s gruesome The Toy Box; a femme fatale in the neo noir Kissing Jake; and as the action heroine, Toy London, in Vengeance Wears a Skirt. She continues to work hard as a model and actress while maintaining straight A’s at the college she attends full-time. She strives to develop her craft by studying theater and acting. She currently resides in a 1927 Tudor home in Los Angeles with her partner, moviemaker Jason Barnett, and their two shih-tzu dogs.

Bianca Barnett: My dad started a company called “Lunar Models” which sold sci-fi and horror model kits. I had the chance to go to conventions and meet people in the industry. A life-changing event occurred when I had the chance to visit Bob Burns’ basement and see all of the amazing movie memorabilia he had collected. I had always loved films and movie magic, so just seeing it all up close and being able to touch it was amazing. I also remember when the first video store chain popped up in our neighborhood. I rented every horror movie that they had, to the chagrin of my mother.

Bianca Barnett: Well, honestly, it makes me nostalgic because I grew up in the 1980s, a time I feel that horror was really at its peak. Being in a horror movie is thrilling, whether I am the predator or prey, and I try to bring my best to the genre. I’m definitely still learning, though.

Fatally Yours: How and when did you get involved in the horror genre?

Bianca Barnett: The directors of Albino Farm were looking for someone to play the lead female mutant. They had originally cast a woman, but she was very uncomfortable with the idea of wearing all of the prosthetics on her face and head. I had worn prosthetic make-up and blood for photo shoots and extra work in films, so they asked me to audition and that is how I got the part of Pig Bitch.

Bianca Barnett: I have worked hard to make a name for myself and I’ve basically done it all on my own. I still have so much further to go, though, and now I’m studying acting to become a better performer. I’m proudest of taking the time out to talk to my fans and let them know how much their support means to me.

Bianca Barnett: Not always, it seems that the most prominent villains, directors, and big shots are all male. I would love to see that change, and to be a part of that would be amazing.

Fatally Yours: As a woman in horror, have you found it harder to be taken seriously in a genre that seems to be dominated by males?

Bianca Barnett: I have been fortunate enough to not to have encountered any sexism, but I have been offered parts by guys that I just got a creepy vibe from, and of course, I said “no”.

Fatally Yours: Have you ever felt exploited as a woman by any roles you’ve taken? Have there been certain roles you wouldn’t take because you felt the role was too exploitative?

Bianca Barnett:  I don’t have a problem with saying “no” to people and setting up limitations, so I haven’t felt exploited. I don’t take roles with sex scenes or excessive nudity. I am not completely opposed to them if it happens, but it has to be the right film.

Fatally Yours: As an actress, do you feel roles in horror for women tend to be weaker or stronger than those for males?

Bianca Barnett: I’ve seen both weaker and stronger roles for females. I think it depends on the script, but Alien definitely opened the door for stronger female characters. I would love to be an action heroine in a film one day. I love doing stunts – I did all of my own fighting and stunt work in Albino Farm. That was my favorite part!

Fatally Yours: What has been your favorite character you’ve portrayed?

Bianca Barnett: I haven’t met her yet… still waiting for that role!

Fatally Yours: Since you’ve been involved with the horror genre, have you noticed a change in women’s roles within horror whether it be roles in horror films, women behind the camera, women writers, etc.?

Bianca Barnett: I am still so new; I haven’t had the opportunity to work on many horror films yet, but I have noticed many women taking the reins in indie horror films lately.

Fatally Yours: What women do you look up to?

Bianca Barnett: I love Ashley Judd – she’s extremely intelligent and has an innate strength, yet there is something vulnerable about her that makes her human and relatable.

Fatally Yours: What would be your dream role?

Bianca Barnett: My dream role would be a well-written and developed character in a film with atmosphere, amazing sets, and breath taking costumes. A huge budget would be great, too!

Fatally Yours: What advice would you give aspiring women actors who want to work in the horror genre?

Bianca Barnett: Only do what you are comfortable with, whether that means nudity or portrayed violence. Stand up for yourself, but don’t be a diva. Be patient, work hard, and learn your craft. Be kind, humble, and thankful for roles that you do receive and to your fans who are there for you.

Fatally Yours: In your opinion, what makes the perfect scream queen?

Bianca Barnett: A charismatic woman who genuinely loves the genre and appreciates the fan base that comes along with it. Someone you want to see survive and thrive in films.

Bianca Barnett: My favorite horror books were written by H.P. Lovecraft, Edgar Allan Poe, Algernon Blackwood, Ambrose Bierce, and M.R. James. I love anything involving the supernatural or dark arts! The most memorable books of my childhood were from the Scary Stories to Tell in the Dark series! They were written by Alvin Schwartz, but the illustrations by Stephen Gammell made them so eerie! I loved them as a kid even though they scared the bejesus out of me!

I have so many favorite horror films… Evil Dead 2, Black Sabbath, Black Sunday,’70s/80s camping slasher flicks, Squirm, An American Werewolf in London, Freaks, Return of the Living Dead, Alien, Horror Express, Fright Night, Interview with the Vampire, Bram Stoker’s Dracula, The Lost Boys, A Nightmare on Elm Street, Texas Chainsaw Massacre, The Shining, Halloween, Pumpkinhead, Motel Hell, and so many more! I love watching cult and obscure films, even if they are really bad. They are so much fun!

Fatally Yours: What inspires, influences and motivates you?

Bianca Barnett: Watching old horror films really inspires me. I want to be in a movie that people can watch for years and still have fun and get scared.

Bianca Barnett: I’d love to be in a mainstream horror film that takes my career to the next level. I’d also love to be a guest at a convention someday.