Interview with Day of the Woman's Brittney-Jade Colangelo 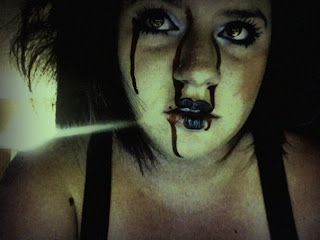 Recently crowned Ms. Horror Blogosphere of 2009, nineteen year-old Brittney-Jade Colangelo is the author behind Day of the Woman, a blog for the “feminine side of fear”. Colangelo also lends her writing talents to HorrorSociety.com as well as Bloody-Disgusting.com.

Colangelo may be young, but she has achieved much in her short time in the sub-genre and there’s no stopping her anytime soon!

Brittney-Jade Colangelo: My mom has been a diehard horror nut her entire life.  My parents used to run the haunted hayride and haunted house in our town so it was something accepted as “normal” in my household.  She raised me on Carpenter/Hill, King, and Craven.  I watched the House on Haunted Hill remake when I was 9 years old and Googled the film to see if it really was the same guy from A Night At The Roxbury.  A picture of Vincent Price showed up and I realized the film I just watched was a remake.  I brought the picture to my local ma & pa video rental store and he armed me with William Castle films and just about everything Vincent Price ever did. If it wasn’t for that awful remake, I would have never fallen in love with the Golden Age of the genre.

Brittney-Jade Colangelo: Horror isn’t just a passion or an obsession; it’s a lifestyle.  Horror lovers are this weird sub-species of humanity that can bond together over the love of something so strange to love. We scream together, we laugh at good kills together, and we stay up all night IM’ing each other when we can’t sleep for fear of nightmares.  Horror is my outlet for every emotional experience, and I would be nothing without it.

Fatally Yours: How and when did you start writing about the horror genre?

Brittney-Jade Colangelo: I started writing all my “comparative” papers in junior high and high school with novels we were reading, but I started writing on the interwebs last February. I have been a blog stalker for a few years now, but I noticed a lack of not just female voice, but a young voice. I had started writing a blog for fun when B-Sol of The Vault of the Horror discovered it. He dropped me an email telling me he loved what I was doing and wanted to help promote me. The rest, is history.

Brittney-Jade Colangelo: B-Sol asked me to help out on his top 10 lists for Bloody-Disgusting.com. It was really surreal to see my name alongside an article on the most widely read horror website on the planet. Recently, I applied and got the position of screener reviewer for them. I can’t wait to start the job and be a part of something bigger than anything I could dream of.

Fatally Yours: How would you convince people who aren’t horror fans to give the genre a try?

Brittney-Jade Colangelo: I have a few “gateway” films that I’ll show my friends.  Zombie comedies seem to always go over well and after I’ve gotten them in the horror-comedy mood, I’ll jump to Evil Dead II, which will then follow with something a bit scarier. I make sure to never give them a crazy B-Movie that only horror nuts would love because I’d never want to scare them away.

Fatally Yours: In your opinion, what constitutes a good horror review? What guidelines do you follow when reviewing something?

Brittney-Jade Colangelo: I hate when people try to do “eloquent” reviews.  I’d much rather hear someone’s opinion in THEIR voice, not their voice trying to be Roger Ebert.

Brittney-Jade Colangelo: I think it’s dependent on what aspect. As far as acting is concerned, I think women have men WHIPPED as far as recognition. If you’re referring to blogging or production, I feel women don’t get nearly the recognition they deserve. Unless you’re a die-hard horror junkie, most people don’t even know that Michael Myers was the brainchild of not just Carpenter, but a woman named Debra Hill.

Fatally Yours: As a woman who writes about horror, have you found it harder to be taken seriously in a genre that seems to be dominated by males?

Brittney-Jade Colangelo: I have. I will admit that I’ve gotten more slack for my age than I have for my gender, but it is a constant struggle. People have x-posted my articles and they’ve commented things like “Since when has it been acceptable to listen to a teenage girl talk about horror?” It’s frustrating, but reality.

Fatally Yours: Since you’ve been involved with the horror genre, have you noticed a change in women’s roles within horror whether it be roles in horror films, women behind the camera or women writers?

Brittney-Jade Colangelo: I feel that we’re becoming more vocal and prominent. After winning Ms. Horror Blogosphere, I am starting a league of female horror bloggers to make it easier for blog readers to catch up with what women writing about horror are doing. I’m hoping that this league of ladies will change people’s existing stigmas.

Fatally Yours: What women in horror do you admire?

Brittney-Jade Colangelo: I have the utmost respect for Kate of Love Train for the Tenebrous Empire first and foremost for being a huge inspiration for everything I do as far as blogging is concerned. I’ve always been a huge fan of Kyra Schon [zombie girl Karen Cooper in the original Night of the Living Dead] for not only being a horror icon for women, but for being one of the most approachable idols I’ve ever come in contact with. Debra Hill has been an inspiration as she is one of the brains of the most iconic horror character since the Universal monsters.

Fatally Yours: What inspires, influences and motivates you to keep writing about horror?

Brittney-Jade Colangelo: My readers inspire me to do what I do.  They give me a sense of belonging and they love what I do. It gives me purpose.

Brittney-Jade Colangelo: My favorite horror film of all time is Evil Dead II. The best film “quality” wise for me is The Shining.  My favorite foreign horror film is Let The Right One In. A film I’ll NEVER get sick of is Suspiria and of course Michael and Freddy hold a dear place in my heart alongside a 5 year old me and my mother.

Fatally Yours: Outside of horror what do you enjoy doing?

Brittney-Jade Colangelo: I am a competitive baton twirler, pageant queen, theatre and English major at university, I volunteer at domestic violence shelters and animal shelters, help my mom run a daycare when I’m at home, support local artists of all forms, and am a bonafide professional Facebook creeper. I’m addicted to Wife Swap, stand up comedy, the old Batman television show, and I’m a cartoon connoisseur. I’m awful at baseball but I bleed Cubbie blue.

Brittney-Jade Colangelo: To love doing what I do, and to have other people love what I do just as much.

Fatally Yours: Where can people find your reviews/more info on you?