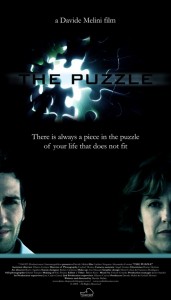 The Puzzle is a short 5-minute film from writer/director Davide Melini and is an Italian/Spanish production. Though it is such a short film, it surprisingly accomplishes a lot.

The film begins with a mother (Cachito Noguera) receiving a call from her son (Alessandro Fornari), yet again asking for money. Exasperated and angry, the mother tells him no and hangs up. She then returns to one of her favorite pastimes – completing a puzzle. Yet, as the night progresses and she gets closer to finishing the puzzle, a disturbing image soon appears.

The Puzzle is stylishly shot and for being such a short, to-the-point film it is nonetheless enjoyable. You almost want the story dragged out a little longer just to see what writer/director Melini would do with it. The film utilizes colors and lighting very effectively, showing the mother’s home as very bright and cozy in the beginning of the film, but making it very dark and foreboding in the last few minutes.

The tension is further mounted by the help of a solid score as well as the knowledge that something terrible is going to happen. At the end, something shocking does happen and though you expect something, this doesn’t rob the effectiveness of the act when it actually does happen.

There’s not very much time for character development or a complex story, but the film still succeeds in creating suspense. In the first few moments we do get a feel for the mother’s character and that is all we need for the simple story. The story might be simple, but it nonetheless pulls the viewer in and creates a lot of tension.

Davide Melini has created a fine short film with The Puzzle. If this is any indication of the caliber of film he can make, I look forward to his feature-length projects!
Posted by Sarah E. Jahier at 5:22 PM