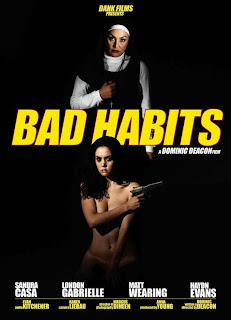 Bad Habits is a stylishly filmed Australian flick that harbors a much more complex, surreal storyline than its nunsploitation roots would lead you to believe. It is a film that is elevated far above the usually trashy, exploitative films that it pays homage to.

The synopsis of the film, from the official site, is as follows:

Sister Marie Fenche (Sandra Casa) is a woman on the verge of collapse. Barely able to distinguish reality from fantasy, Marie’s life is thrown into turmoil when she awakens one morning, alone in a room with a corpse in the bathtub. Is she being set up or did she kill the man herself? The truth is not even Marie knows for sure.

Bad Habits is a journey straight into the subconscious of its protagonist; a place where reality and fantasy intermingle so completely as to be entirely indistinguishable. Marie’s only grounding in this confused world is Jamie (London Gabrielle), an innocent young nun who is both equally enamored and repulsed by her.

Jamie can only help so much, however, and Marie’s world comes crashing down when she encounters a mysterious stranger who triggers dark and dangerous memories.

Unable to sleep and addled by pills Marie releases her final grip on reality as her dementia leads her deeper and deeper into a world of violence, sex and drugs.


Bad Habits’ story, written by Dominic Deacon (who also directed), is a mysterious, surreal and nightmarish trip through the fractured mind of the lead character, Sister Marie Fenche. The film isn’t just a crude, perverse exploitation flick, but goes deeper to examine the confused mind of Marie. Sure, there are lesbian nuns, nudity, drug use, sex scenes and bloody murders, but the flick is far less exploitative than it touts itself to be.

The character of Sister Marie Fenche is so interesting because she has no moral compass. As a nun, she is supposed to be holy, but she is anything but! She drinks, fights and fucks her way through each night without a single care for the consequences. She is addicted to heroine, pills and Lord knows what else. She can’t tell the difference between right and wrong or reality and fantasy. She kills indiscriminately, but does it all while looking damn good!

Speaking of looking good, Bad Habits has a very stylish noir/pulp thriller look to it despite its low budget. The film has an amazingly polished and professional look to it as well. The film’s grim tone is set by the gritty atmosphere of the film. Each scene is bathed in shadows and shades of gray and blue. The only breaks in the bleak atmosphere are the jarring splashes of red as blood flows from the multiple murders that occur in the film. It’s not that the film’s focus is on gore, but we do see our fair share of slit wrists and throats, stabbings, shootings and so on.

For a low budget film, I was mostly impressed with Bad Habits. Even the acting by everyone involved was top-notch, something usually unheard of in no-budget film. Despite this high praise, the film did have its problems. The biggest problem was the pacing. The film is broken up into three segments, the first called “Lizard in a Woman’s Skin” (a nod to the Fulci film), the second “So Sweet…So Perverse”, and the last and final part “Crazy Hot”. I felt that breaking the film up into segments was pretty unnecessary, especially since most of the film is surreal anyway and the audience never knows if what they are seeing is real or just a figment of Marie’s fractured mind. They also break the film up and slow down its already languid pace.

Overall, Bad Habits is a much more sophisticated film than it gives itself credit for. Despite some pacing problems, the film is beautifully filmed, expertly acted and contains a mysterious, interesting story. The surreal quality of the story reminded me a lot of David Lynch’s experimental films, quite an accomplishment for an independent film!