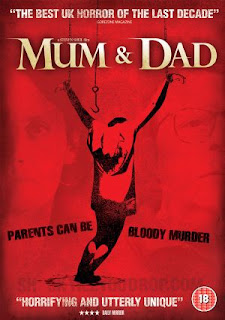 Family can be a touchy subject for some people. While some people absolutely adore their family and wouldn’t trade it for the world, others are embarrassed or had such an unpleasant upbringing that they want nothing to do with their relations. Regardless of whether you love or loathe your family, chances are that there are usually more than a few skeletons hidden in the family closet.

In the British film Mum and Dad, the family has its own share of skeletons (and corpses and body parts) in their home. You see, Mum (Dido Miles) and Dad (Perry Benson) are two deranged psychopaths that like to kidnap young adults from the nearby airport and torture them. Polish immigrant Lena (Olga Fedori) escaped her oppressive family and has fled to England to start a new life for herself. She works as a janitor at the airport, where she meets Birdy (Ainsley Howard), a chatty girl who invites her out with her introverted brother, Elbie (Toby Alexander), for drinks after their shift. Lena declines, but when she misses her bus she is forced to follow Birdy and Elbie to their home. Yet Lena has no idea of the horrors that await her at the hands of her new Mum and Dad…

Mum and Dad is an extremely disturbing and engaging horror film! It is probably one of the better recent horror flicks to come out of England and it just had me gaping at the screen in shock for its entire running time! The film is supposedly loosely based on the real-life horror story of serial murderers Fred and Rose West, who raped, tortured and murdered their victims, including their own children. While the atrocious crimes committed by the West’s are appalling and no film could ever truly show the horror experienced by their victims, Mum and Dad does a very good job of creating an unpleasant atmosphere and showing us how depraved the two killers are.

Mum and Dad certainly captures the perversion and savagery of the two title characters. One of the early scenes shows “Dad” pleasuring himself with a bloody body part while another shows the family gathered for a normal-looking breakfast while a hardcore adult film plays in the background. It also doesn’t shy away from showing the two killers’ sexual perversions as well. The level of depravity isn’t there just for exploitation, but to show just how completely psychopathic and dysfunctional the family is. The film by no means cheapens the experience by solely focusing on the gore (which there isn’t a lot of, though it has its fair share of torture), instead it is more of an intense psychological study of a seriously fucked up family who exist far beyond any normal moral standards.

I really enjoyed how writer/director Steven Sheil made the characters of Mum and Dad try to have a “normal” façade – especially in one of the first scenes after Lena’s abduction where the family as a whole is introduced. While the family acted like monsters the night before, at breakfast everyone is amiable and acts like a normal, happy family. Mum cooks up breakfast, Dad reads his morning paper, Birdy chit-chats and Elbie cleans up bloody body parts. Meanwhile, Lena sits very confused as a porno plays on the kitchen television. You definitely don’t see such unsettling scenes like this in your average horror movie! Also, the fact that Dad worked a normal job and had friends really upped the creep factor in the film. I mean, this family of psychos could be your next door neighbors and you wouldn’t know it! Besides Mum and Dad, the characters of mean-spirited Birdy and remorseful Elbie are equally effective. While the tortures that Mum and Dad inflict on Lena would be enough, the manipulative nature of Birdy and the forlorn attitude of Elbie contribute to her suffering. Even though Birdy and Elbie went through the same ordeal as Lena, they offer her no help and no support.

While the characters were very well-developed by Sheil, the wrong actors could have spoiled the careful tension between everyone. Luckily, Sheil cast a dynamic cast to make sure the characters were played to their full potential. First off, Olga Fedori was fantastic as Lena! She really makes you sympathize with her character and gives a very strong performance. I also liked that her character tried to outsmart her captors and waited to see when she had an opportunity to escape. Next we have Ainsley Howard as Birdy. She made her character extremely likable in the first few scenes, but when we find out who she really is and how mean-spirited she can be our opinions are soon changed! Howard handles this switch extremely well and makes it believable to boot! Toby Alexander doesn’t speak any lines in the film, but his tortured puppy-dog eyes speak volumes as to what he is going through. Finally, we have Dido Miles as Mum and Perry Benson as Dad. These two play their characters so well that even though they were committing heinous acts I couldn’t wait to see them back on screen. Benson brings a repulsive quality to his blue-collar dad and nearly oozes with unpleasantness. Miles is both doting and dangerous as Mum, who “plays” with her “children” by cutting deep gashes all over their bodies.

As for the direction by Sheil, I couldn’t have asked for better. The house where the horrors take place is equal parts dingy (in the torture rooms and where Lena sleeps) and cozy (in the kitchen and living room areas, which look normal). I also liked how the focus wasn’t on the torture and the gore, but went deeper and really showed the twisted relationships between the members of the family. The film was shot in just 17 days, but nothing feels rushed or out of place. The deliberate pacing works perfectly and there is a palatable tension throughout the entire film. The film is set right next to an airport, lending even more credence to the fact that the family had an endless supply of transients (and their luggage) to pick from.

It seems that the issues of the perverted family and/or killer kids has been a staple for horror films for years (The Texas Chain Saw Massacre, Frightmare, Children of the Corn the more recent Eden Lake), but Mum and Dad really hits a raw nerve with its grim tone and its “real” aspect. This is one film that will surely leave you feeling disturbed and a little dirty after watching it! It is certainly one of the best British horror films I’ve seen and will definitely make you appreciate your own family more!

Available from Amazon!
Posted by Sarah E. Jahier at 8:48 PM