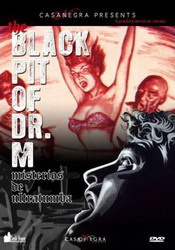 Full of dark shadows, creeping fog, howling wind, ghostly apparitions, mental patients, disfigurement, death and murder, The Black Pit of Dr. M (aka Misterios de Ultratumba) is a masterpiece of gothic filmmaking that deserves far more attention and praise than it has received.

Dr. Mazali (Rafael Bertrand) and Dr. Aldama (Antonio Raxel) have sworn a pact that states whomever dies first must figure out a way for the other to experience the afterlife while still being able to return to the flesh. When Dr. Aldama dies, Dr. Mazali conducts a séance to remind his friend of their promise. Dr. Aldama speaks through a medium to Dr. Mazali that in precisely three months at 9 pm he will fulfill his promise and show Dr. Mazali the afterlife, but at a horrific cost.

Meanwhile, Dr. Aldama’s estranged daughter Patricia (Mapita Cortés) is led by the ghost of the late doctor (her father!) to the mental hospital where Dr. Mazali works. Patricia falls for Dr. Mazali’s young intern (Gastón Santos), while Dr. Mazali becomes entranced with the pretty girl. All the while, time is quickly passing and leading to the fateful night when the doctors’ pact will be realized.

One night, a mental patient (Carolina Barret) of Dr. Mazali gets exceedingly violent and hurls a bottle of acid in the face of an orderly named Elmer (Carlos Ancira), horribly disfiguring him. When the same mental patient turns up dead in Dr. M’s arms, he is blamed for her death and convicted of her murder. All the way to the gallows he believes Dr. Aldama will fulfill his promise and save him from death…but at what cost?

The visuals of the long halls of the arcane mental hospital, the dense fog, the Doctor’s villa and the dark shadows will strike you first. There are certain shots that are framed to perfection, including one scene that features the starkly back-lit gallows, which rival any of the classic Universal horror films for their gothic mystique. 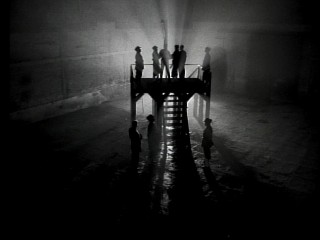 Secondly, you will notice that the story of intrigue builds upon itself and never leaves a dull moment. Not only that, but time is adequately taken to properly develop the characters as the story unfolds. While the gorgeously gothic visuals help grab your attention and establish the dark mood of the film, it’s the compounding storyline that keeps building that really sets this masterpiece apart. It really has a bit of everything, from the ghostly visits of Dr. Aldama to the deranged mental patient to the disfigurement of Elmer and the strange love triangle between Dr. M, Patricia and the intern. It may sound a bit overwhelming at first, but both director Méndez and writer Obón skillfully weave an engaging story.

The actors also add to the high quality of the film, doing an amazing job of bringing their characters and their inky motivations to life. Rafael Bertrand is wonderful as the titular Dr. M and is easily the Mexican equivalent of Vincent Price! I also enjoyed the beautiful Mapita Cortés as Patricia. She added a real spark to the film. Even the woman who played the violent mental patient, Carolina Barret, did a fantastic job with her character. Though she had no dialogue, her facial expressions and body language artfully portrayed all the mad emotions in her character. All of the actors’ passionate portrayals of their characters, coupled with the mysterious atmosphere and intriguing story, helped create an unforgettable film.

Unless you aren’t a fan of old black and white movies (and if you’re not, you are truly missing out), there isn’t one negative thing I can say about this film. From the opening death bed sequence to the grand, horrifying finale, The Black Pit of Dr. M had me hooked. Its stark chiaroscuro cinematography coupled with its intriguing story set in the fog-shrouded villa and mental hospital will leave you in awe.