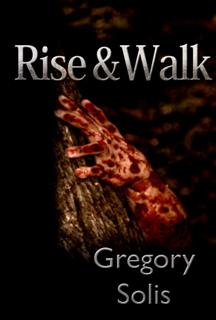 I’ve read quite a few zombie books this summer, and let me tell you, when I got my grubby mitts on Gregory Solis’ debut novel Rise and Walk, it was one of the few that I couldn’t put down! I finished the book in just a few days, solely because of the fact that I couldn’t stop reading! Rise and Walk is packed with enough gruesome gore to slap any gorehound’s face with a silly smile, yet it also boasts a colorful array of characters (most of which die horrific deaths), a cool location (a paintball competition in the middle of nowhere) and plenty of surprises that come lurching out of nowhere.

After investigating a meteor that has crashed in the boonies, a bunch of college kids and their professor turn into zombies in the isolated mountains of Northern California. They slowly stumble towards the nearest sign of civilization, which just happens to be a busy campsite where a paintball competition is taking place. As chaos quickly ensues, two courageous women and two experienced men must battle their way through the hungry, hungry hippos – I mean zombies – to find safety.

Rise and Walk is a book that really grabs you by the lapels, gives you a good shake and proceeds to rip out your throat! Solis wastes no time diving into the action, which, in the case of this book, works just GORE-geously, darling! Solis also has the ability of developing each of the characters, no matter how short-lived their appearances (and disappearances) may be. A character may only live for a few lines, but darned if Solis doesn’t divulge just enough information about them to make us care about their demise! He also brings back some of the characters that we knew “in life” as zombies, so we know them as they were, alive, and as they became, dead and yet reanimated. The meticulous character development makes it easier to visualize what is happening and also pumps more heart into the proceedings.

Another thing that involves us in the story is Solis’ description of everything…the ripping and tearing of human flesh is almost audible, as are the snarls of the zombies. One can almost smell the decay, sweat and blood in the air as the four survivors fight for their lives. Though the setting is in the wilderness of the mountains, claustrophobia soon sets in because of the oppressive atmosphere and the constant threat of zombies. Everything just feels so realistic and really gets you thinking, “Well, how would I respond to a massive zombie outbreak?”

Rise and Walk was all DIY (even the wicked cool cover) by Solis, who originally wrote a screenplay that he planned to turn into a movie. Lucky for readers, the movie didn’t pan out (yet) and we got quite the gut-muncher of a zombie novel! Solis already has the next book in a planned trilogy lined up, called Rise and Walk: Pathogen, which I’ll be eagerly awaiting.

If you’re looking for a good ol’ zombie book to read this summer, look no further than Rise and Walk. Just don’t say I didn’t warn you when you stay up a few nights in a row because you can’t put it down!