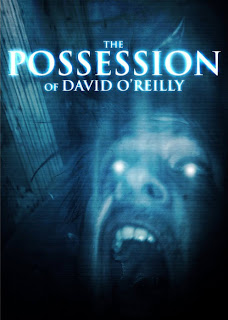 The Possession of David O’Reilly is a British film about a happy couple that agrees to temporary take in their friend David after he splits from his girlfriend. They soon discover that all isn’t right with David – he is increasingly paranoid, sleepwalks, wakes up screaming and claims to see supernatural entities. As the couple begins to experience unexplainable events themselves, they realize David’s wild claims may have some validity and soon find themselves in a fight for their lives.

Alright, so I may not have liked Paranormal Activity, but I liked this film even less. Whoever said this film is what Paranormal Activity should have been was on crack. This just feels like a cheap knock-off that was poorly made. It starts off promisingly enough, with David showing up ominously on his friends’ doorstep in the middle of the night. His deterioration occurs quickly as he starts hearing strange growlings and prowlings from outside. This was all fine and dandy, but we never seen him pre-crazy, so right off the bat I assumed he was certifiable and everything he saw was fake. Now, I’m not saying if that is how it turns out in the end or not, but just that seed of doubt pretty much made me dismiss the entirety of the film.

Though this film has been compared to Paranormal Activity, it is not all captured on hand-held video cameras from the characters. There is still plenty of shaky cam and shots from the characters’ perspectives, but they are not carrying around camcorders capturing everything. There is a motion-detection security system that the married couple has installed in their home, but though it is highlighted at the beginning of the film it plays a disappointingly small part in the film overall. This is a squandered opportunity in my opinion.

Also, the characters make so many stupid decisions you can’t really cheer them on, but instead cheer for them to die. They could choose to leave the house at any time, but instead remain cooped up inside waiting for the entities to arrive with the darkness. And was the weird sub-plot with the pregnant woman really necessary? It didn’t add anything to the story and when it was revealed who she really was this plot point just kind of disappeared from the rest of the film. It also didn’t seem believable that the married couple just believed David without much proof. If my friend started acting crazy you better believe I’d call the nut house to take them away instead of believing they saw scary monsters in the dark.

I did like that the monstrous entities could only be seen in the dark, but even this plot point was undeveloped. If it wasn’t dark, were they still able to kill in the light? If so, then why not just leave the lights on? I also didn’t like how much we saw of the entities. Less would have been more in this case, no matter how cool they looked.

There was also some very weird editing going on in the film. There are multiple scenes where the music swells dramatically, indicating that we should be seeing something…but the scene is empty of any creepy stuff. I even rewound the film to see if I had missed something in several scenes, but nothing was there. These scenes were so frustrating because instead of delivering scares they deliver absolutely nothing.

The Possession of David O’Reilly had some good ideas, but really failed to use them to make an engaging story. Instead, we get a confusing, messy story that doesn’t live up to any of its potential. Even Paranormal Activity is better than this frustrating film.