Book Review: The Art of Hammer 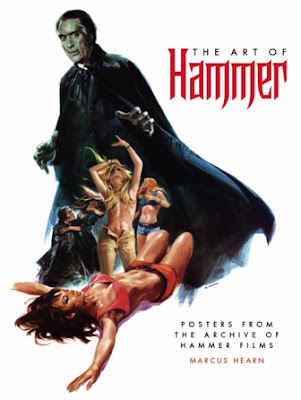 One of the books I’ve been anticipating most is The Art of Hammer: The Official Poster Collection from the Archive of Hammer Films. Not only am I a fan of Hammer horror and all its lurid but classic films, but I also love poster art! Poster art was, and still continues to be, a major marketing force in cinema, and for good reason. In Hammer’s heyday, posters and handbills were generally the first thing people saw in regards to a film and would greatly influence their decision to see it.  To this day, studios spend a large chunk of change on marketing, which includes poster advertisements. So besides just looking pretty, posters serve a greater purpose in promoting a film.

This, and more, is explained in the introduction by author Marcus Hearn. This informative section gives a brief overview of Hammer Films, its poster artists and the importance of utilizing their posters for marketing. After this short but informative overview, the book moves into showcasing Hammer’s beautiful posters. The level of craftsmanship on these posters is very impressive, considering most of them were hand-painted or hand-crafted, not something you see very often nowadays. The posters are organized by decade, from 1950 to 1979, and really show why Hammer is almost as well known for its promotional posters as it is for the films themselves.

The Art of Hammer showcases the studios’ iconic posters with nearly 300 examples, both familiar and rare, drawn from Hammer’s own archives as well as from private collections worldwide. There are unforgettable images contained in this gorgeous book, from films like Dracula, The Gorgon, Curse of Frankenstein, Devil Rides Out, The Satanic Rites of Dracula, To the Devil a Daughter, Vampire Circus and many, many more! Besides posters of horror films, this book also features comedies, that are perhaps lesser known, that were released by Hammer studios. My favorite posters in the book were the foreign ones, which were just wild in the interpretations of the films! However, my absolute favorite poster was a black and white one for Dracula Has Risen From the Grave, which features a buxom beauty with two pink band-aids over bite marks on her neck! I love the cheeky vibe of this poster!

The Art of Hammer: The Official Poster Collection from the Archive of Hammer Films is a real treat for both fans of both the golden age of Hammer and poster art fans. The beautiful coffee table book showcases some of the best iconic posters from Hammer Films and not only that, it is masterfully made! The pages are glossy, thick and the book itself is huge! It is wonderful to see the colorful posters in such a large format that really pays them the respect they deserve. This is a book that will definitely grace your living room table for years to come.

A while back we reviewed another fascinating book from Marcus Hearn called Hammer Glamour that was filled with stunning photographs of the starlets from Hammer movies. I was extremely impressed with the book, and it looks like Hearn has done it again with The Art of Hammer. There is just an unequivocal joy to flipping through the colorful pages of glossy Hammer posters!

The Art of Hammer is being released November 23rd, 2010 and would make a breathtaking gift for that special person in your life this holiday season!