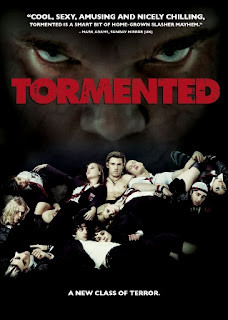 This is a pretty fun “teen scream” type of flick from the U.K. that was pretty entertaining. It’s about a high schooler who is mercilessly picked on by the popular clique until he commits suicide, but returns to pick off his classmates one by bloody one. The film starts with the overall “good girl” and class president-type Justine (Tuppence Middleton) giving the eulogy at Darren Mullet’s (Calvin Dean) funeral. However, she can’t even remember who he was. Soon after, popular dude Alexis (Dimitri Leonidas) asks Justine out and she quickly falls in with the popular clique, who used to harass Darren endlessly. Before long, students start dying grisly deaths and it appears that Darren Mullet has returned from the grave for revenge against those who bullied him.

Tormented has entertaining characters, grisly deaths, ocular horror, a nice revenge story and a surprising ending! It also looks slick and polished and there is a fair assortment of characters (the popular kids, the nerds, the goths, etc.). The tense relationships between cliques are nothing new, but Tormented keeps things interesting with witty dialogue and colorful characters. Even though the characters seem to be stereotypical, writer Stephen Prentice gives each of the characters a distinctive voice and keeps things fun and light.

Offsetting the laughs is the gore…and I gotta say that there are some pretty inventive deaths here! There is plenty of spatter and a high body count in Tormented, and my favorite, most squirm-worthy death scene in one involving ocular horror! Ouch!

The cast all does a fantastic job and director Jon Wright really brings out the best in every single one of them. Wright also gives us a very pretty, very visually stimulating film. Tormented looks great and has that slick look, however it’s not so slick that it detracts from the actual story.

I was pleasantly surprised how much I enjoyed Tormented. It’s a fun flick that I think most horror fans will enjoy. Check out this British film if you get the chance!

Available from Amazon!
Posted by Sarah E. Jahier at 1:23 PM