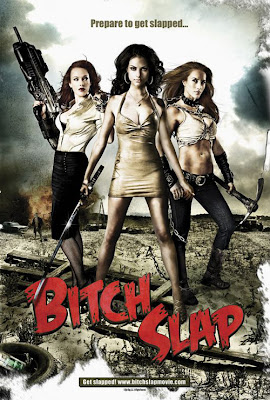 Bitch Slap is a straight-forward exploitation flick that emulates the grindhouse flicks of the ‘60s and ‘70s. It pretty much has all the exploitative elements you could ask for…oodles of violence, nudity and sex. But let me get more specific…it’s got girl fights, water fights, tons of boob shots, gratuitous slo-mo, strippers, Kevin Sorbo (in a small role), cat fights, girl-on-girl action, nuns, an Asian schoolgirl with a killer yo-yo, a punk thug with Tourette’s, Mohawks, stolen diamonds, explosions, spies and even Lucy Lawless as Mother Superior. Really, what more could you ask for?!

The premise is simple: three women end up in the middle of the desert to steal a bunch of valuable diamonds from an underworld kingpin. As they struggle to find the exact location of the jewels, they get a few surprise visitors and secrets start being revealed as we get a glimpse into their past to see exactly how they ended up in their current predicament.

Full of non-stop action, Bitch Slap is an enjoyable rollercoaster ride of brutal violence interspersed with sexy slo-mo shots of our three girls, strippers and the like. It is also wickedly funny in parts and really wears its inspirations on its colorful sleeve. It is certainly over the top and outrageous, but if you like that sort of thing you’ll love Bitch Slap!

The acting is equally over the top, but it works in the scope of the film! All of the actresses do a fantastic job and I found myself liking them all. Julia Voth played the seemingly innocent Trixie, Erin Cummings played the leader Hel and America Olivo played the tough Camero. The supporting characters were also equally good.

However, an exploitation film isn’t exactly focused on acting, so let’s talk about the action, shall we? Both kinds of action, the sensual and the explody kind, came fast and furious. If people weren’t getting their asses handed to them or getting blown to bits, then they were gettin’ down. Though some of the special effects were done with obvious green screen work (the whole Vegas scene, among countless others), most of the blood and guts work was excellent! And even when it looks fake it just adds to the over-the-top charm of Bitch Slap! I also liked the use of split screen to show both side of the action at all times. And it looked damn cool, too!

I also appreciated the nice little twist at the end…very well done since I didn’t see it coming!! The narrative structure, as it kept jumping further and further back into the past as the film progressed, kinda annoyed me at first but made sense after a while. Kudos to writers Eric Gruendemann and Rick Jacobson (who also directed) for creating such a fun story and for tying everything up at the end.

If you enjoyed films like Grindhouse and Machete, you will no doubt love Bitch Slap! Check it out today!

Available on Amazon!
Posted by Sarah E. Jahier at 12:58 PM