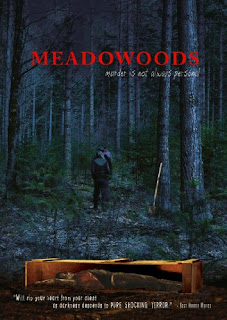 You all know that faux documentaries are nothing new in the horror genre. “Found footage” flicks have been popular from Cannibal Holocaust to Paranormal Activity and are now more common than ever thanks to the heightened scare factor, immediacy and realism of faux docs. Plus, they can be relatively cheap to make for filmmakers on a budget! However, they are so “dime-a-dozen” nowadays that sometimes they are more a chore to sit through than a pleasure.

So, I didn’t really have high hopes for Meadowoods, where three college students decide to film themselves planning and executing a murder.

The three disenfranchised college kids are Stephanie (Michelle Roe), a bitter young woman who has lost all faith in humanity, Travis (Connor Thorp), the seemingly happy-go-lucky leader of the group but who hides a sinister, sociopathic nature and the brooding cameraman Ryan (Michael Downey). The three are fed up with being neglected by their parents and living in a small podunk town, so to go down in history they decide to kidnap and kill a random person, filming everything. However, once their plan starts to become a reality, Ryan starts having second thoughts, especially after he gets close to their intended victim.

I wasn’t expecting too much out of Meadowoods and figured it would just be another throw-away serial killer flick with lots of violence and brutality. Lucky me, I actually got a rather chilling story about the ambivalence and indifference of seemingly ordinary people. The scare factor in Meadowlands isn’t in the final scenes where the kids’ quarry is trapped and tortured, but rather in the scenes where each of the kids are interviewed, stating their reasons for wanting to kill someone, their views on death and the afterlife and so on. Their coldness and flippancy towards killing another is absolutely chilling and portraying this is where this film succeeds!

Of course, none of this would have worked without competent and convincing actors and surprisingly for an indie film the acting here is top-notch across the board. Connor Thorp, Michelle Roe and Michael Downey all do a stunning job playing the trio of friends. They were all entirely convincing as bored college kids looking for a sick thrill. Very spooky performances! And Ila Schactler gave another believable performance as their intended victim. She was likable and perfect as the girl next door!

I also want to give kudos to writers Stuart Ball, Scott Phillips (who also directed) and Anna Siri for creating such realistic characters and such a chilling story. I appreciated that the characters weren’t your stereotypical stupid teens and that the script offered more than just violence.

My only problem with Meadowlands was the ending, which dragged a bit too much in my opinion. It was almost like they used most of it as padding since it got so repetitive. The taunting and torturing of the victim was fine, but did we really need to see her sit there and scream for what seemed like 20 minutes straight? I think the ending killed the unsettling feel of the rest of the film, which is unfortunate since I enjoyed the first part of the film so much.

However, I would still recommend you check out Meadowlands. It isn’t your typical “found footage” horror film and really takes the time to frighten us psychologically through its portrait of today’s bored youth.

Available from Amazon!
Posted by Sarah E. Jahier at 3:34 PM