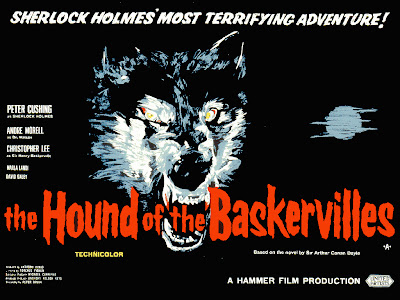 This 1959 film is Hammer Studios’ treatment of Sir Arthur Conan Doyle’s Sherlock Holmes story. With a wonderful cast, including Peter Cushing and Christopher Lee, and an atmospheric setting of a castle on the foggy English moors, this is a classic that pairs well with a dimmed room and plenty of popcorn.

The story begins with a cruel aristocrat, Sir Hugo Baskerville, tormenting and exploiting his servants. After offering up a maid to his slovenly guests during a party, Sir Hugo discovers she has escaped and he gives chase. He catches up to the girl near some crumbling ruins on the moor and stabs her to death. However, immediately after he is killed by a “hound of hell”. Many years later the curse of the “hound of the Baskervilles” persists. Sherlock Holmes (Peter Cushing) and Watson (Andre Morell) are hired to investigate the most recent death of a Baskerville and to make sure the last remaining heir, Sir Henry (Christopher Lee) doesn’t succumb to the “curse”. Can Holmes solve the case before it’s too late?

I love old mystery movies like this! However, The Hound of the Baskervilles is really the cream of the crop! Its well-constructed plot, creepy setting and enjoyable characters all kept my attention for its entire running time. I was even trying to figure out “whodunit” half-way through, but I must admit Sherlock Holmes had me beat on this mystery!

First off, the setting is just gothically gorgeous…crumbling ruins in the moonlight, misty moors, old creaky castles, howling hounds, flickering candlelight…I could gush on and on, but you probably get the idea! I absolutely love the gothic aesthetic, especially when it’s pulled off in film correctly. I really wasn’t expecting a Sherlock Holmes tale to have such a creepy and romantic atmosphere, but Hound certainly did and pulled it off as well! Director Terence Fisher, no stranger to gothic horror, certainly shows off his skill in this film!

Secondly, the story was just fantastic. It is based on Sir Arthur Conan Doyle’s tale, so I really shouldn’t be surprised! The film sticks pretty close to the original story as well, though a few liberties and changes were made. I’ve heard people b*tch and moan that they changed too much, but I don’t think that’s the case. The film’s ending feels a bit more realistic instead of the romantic ending Doyle imagined in his book and the other liberties are small enough to not really affect the whole of the story. Kudos to screenwriter Peter Bryan for sticking close to the original story while making it his own as well!

Lastly, the characters and the acting were excellent! I especially liked the cocksure and arrogant Sherlock Holmes that Peter Cushing played! Andre Morell was equally good as the competent Watson, whom we spend most of the first part of the film with. And who can forget Christopher Lee? Ladies and gentlemen, he is absolutely scrumptious here!! I mean, can I please just swoon in his arms? Anywho, Lee is great as the befuddled Sir Henry, who is not sure whether to believe his family’s curse or not. All of the other players in the film did a fine job, too.

The film didn’t need that many special effects, so there’s not much to talk about in that respect. A bloody knife and a mine that caves in on Holmes offer the most shocks in the film, besides the exciting ending, but that doesn’t mean the rest of the film is boring! Far from it, it’s amazing what director Fisher does with atmosphere and great actors! The cave-in and a nighttime chase through the moors were the most exciting scenes for me to watch, but the ending is also quite good and comes as a bit of a shock!

If you haven’t had the pleasure of watching Hammer’s Hound of the Baskervilles, do yourself a favor and get it now! It’s simply elementary, my dear readers!