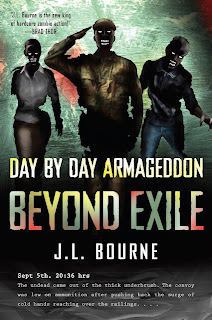 Following up his novel Day by Day Armageddon (disclaimer: which I’ve never read), author J.L. Bourne gives us Beyond Exile, the next chapter in a military soldier’s attempt at surviving and documenting the zombie apocalypse.

I’ll be honest (as I always am) – I really wasn’t into this book when I first started reading. Perhaps it was because I hadn’t read the original, but I just couldn’t get into the short, direct journal entries filled with military jargon. However, after about 100 pages in the story really started making pace and I started enjoying it more and more!

Though I hadn’t read the original, I had no problem understanding what was going on. The film picks up with the narrator and a group of survivors holed up against the zombies in some underground military bunker. They eventually make contact with the military (or what’s left of it), but when our narrator goes on a recon mission for supplies his plane crashes, leaving him hundreds of miles from “home”. Can he make it through the zombie hordes and the dangerous radiation of major cities to return to the one home he has come to know?

There is lots of action in Beyond Exile, from swarming zombies (both of the fast and slow variety) to the threat of roving bands of bandits to rogue military units and so on. As our narrator traverses a rough landscape, dodging zombies and battling loneliness, I was left on the edge of my seat, rooting for him to make the long trek home unscathed.

Though some of the jargon left me baffled, lots of people familiar with the military, weapons and so on will be thrilled by the detail here. Author J.L. Bourne is a Naval man himself, and his military experience is evident in Beyond Exile. Though I might not have known what all the technical terms were, I think I got the general gist and besides, the jargon gave the story that much more credence.

Day by Day Armageddon: Beyond Exile is an entertaining, fast-paced book. Though a reading of Bourne’s first book in the series, Day by Day Armageddon might be beneficial to start, it’s definitely not necessary to enjoy its sequel. It took me a little while to get into the flow and style of the novel, but once I did I couldn’t put it down!