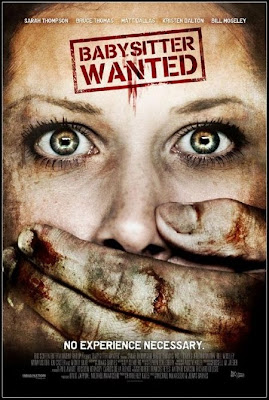 I’ve been waiting (and waiting) to check out Babysitter Wanted for quite some time. Its official release happened in 2008, but it hadn’t hit DVD until this past July. By that point this flick had kinda fallen off my radar and it wasn’t until a friend asked what I thought of it that I remembered this film and eagerly checked it out.

From the cover art you’d assume this is a typical slasher, but remember what your mom told you about judging a book from its cover? I made the same mistake, but was pleasantly surprised by the turn of events in Babysitter Wanted.

Starting off much like the awesome House of the Devil (review), Babysitter Wanted finds the sweet Angie (Sarah Thompson) arriving to her new community college campus to study art history. Her brand new roomie doesn’t have a bed for her, so our dear Angie is in need of some cash…and fast. While poking around the sparse campus, Angie befriends a cute boy, notices some “missing person” posters, and appears to find the perfect babysitting gig. That Friday night she sets out for the isolated farm of the Stanton’s (Bruce Thomas and Kristen Dalton), where she’ll be babysitting their young son Sam (Kai Caster). All seems well until Sam wakes up and eats some unusual food for a little kid…and then the weird phone calls commence and strange noises outside convince Angie that someone is trying to get in. Police Chief Dinneli (Bill Moseley) isn’t much help, but promises to come around to check on Angie. Meanwhile, Angie discovers something unsettling about Sam, the intruder outside and the Stanton’s…will she survive the night?

Ok, I will try not to give anything away in this review because this film is best seen cold, without knowing much about it. I believe the surprise factor of its twists and turns really heightened my enjoyment of it! Be warned, though, spoilers may be present, so proceed with caution!

The film may start off like a slasher, complete with Angie feeling like someone is stalking her. Then when she is babysitting the weird phone calls start…heavy breathing on the other end, but no speaking. Of course, I thought the film was heading into familiar territory, especially when someone started rattling the door and eventually forced themselves into the house and Angie was forced to hide. However, it then took a completely sinister turn that really knocked me off my rocker! The rest of the film was peppered with the occult, torture and black humor. And I don’t wanna say any more because it would give too much away…

Also excellent is the acting. Sarah Thompson really shines as the innocent Angie who later gets tough as she battles the bad guy(s). Despite her “pure” nature, she’s not annoying and you come to care for her through her sweet and vulnerable nature. As things progress, she forces herself to toughen up and her transformation from innocent to kick-ass comes naturally! I also enjoyed Kai Caster’s performance as the creepy Sam, as well as Kristen Dalton and Bruce Thomas as the parents. Even genre-fave Bill Moseley turned out a good performance, this time as a good guy!

My complaints with the film are few, but I felt the pacing towards the beginning was a bit slow. Also several plot holes bothered me…the roommate angle was dropped pretty quick, so why show it at all? It’s like she was just used for convenience in explaining the disappearances around campus and disappeared herself after that. Also, what ever happened to Angie’s boy toy? He pretty much disappeared until the end and it was never really explained why (unless I missed something?).

Despite these annoyances, I thoroughly enjoyed Babysitter Wanted. It certainly threw me for a loop and uses many different tropes from the horror genre to create surprise and suspense. Despite the many different aspects it uses, it still manages to remain grounded and is a hell of an entertaining good time!

Available on Amazon!
Posted by Sarah E. Jahier at 3:21 PM