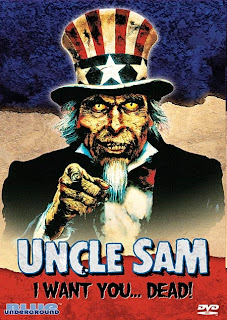 When it comes to 4th of July, horror fiends pretty much only have one genre film to watch – Uncle Sam. I admit I am a little obsessed with horror films set during holidays, but for some reason I had never seen Uncle Sam. Once July rolls around the movie I usually watch is Jaws (which is only incidentally related to Independence Day), but this year I was determined to watch Uncle Sam…even if I got to it AFTER the 4th had already passed!

Uncle Sam tells the tale of uber-patriot Sam Harper who is killed while serving his country in the Middle East. His body is shipped back to his hometown, where his nephew Jody lives with his mom and aunt. Jody worships his uncle and aspires to be just like him. Somehow Uncle Sam is brought back to life, dons an “Uncle Sam” costume and goes around killing any un-patriotic townsfolk.

While Uncle Sam is certainly a “holiday horror” movie and evokes the spirit of summertime and 4th of July, it is a pretty awful movie. Now I understand why I avoided it for so long! From its inconsistent, silly and plot-hole filled storyline to its slow pace, the movie just isn’t that enjoyable. First off, when Sam is shipped back to his hometown his coffin just sits nonchalantly in the house for days! Who in the world just leaves a coffin in the middle of their front room anyway? Secondly, it never really explains HOW he comes back to life. One minute some kids are burning an American flag and the next he is at attention offing the juvenile delinquents. Also, characters, like a crippled kid, show up the last half of the movie as major players when they should have been included since the first half of the film! The film also moves slowly, there aren’t that many kills, and Uncle Sam isn’t scary.

I expected much more from director William Lustig (Maniac, Maniac Cop series) and writer Larry Cohen (Maniac Cop, It’s Alive, God Told Me To), but instead got a watered down, sub-par slasher flick. The one thing that Uncle Sam has going for it is its scathing political commentary, which was way ahead of its time. The Patriot Act didn’t go into effect ‘til years after Uncle Sam was released, but the film really feels like an indictment of that law and how it punishes people that are deemed “un-patriotic” for the silliest of reasons. There’s also a nice social commentary on the United States military and government.

Other than that, though, there isn’t much to recommend for Uncle Sam. It’s too much of a jumbled mess to truly enjoy, though there are a few entertaining kills. For example, the ridiculous potato sack race scene where a cheater ends up losing his head to Uncle Sam’s hatchet is pretty entertaining. Another well-done scene is a fireworks display where the mayor (or senator? I don’t remember) has his body covered in fireworks and mouth stuffed with explosives before being blown up by Uncle Sam.

However, two mildly entertaining scenes do not make up for the fact that Uncle Sam is pretty mediocre…not even the late, great Isaac Hayes (I cannot help but imagine Chef from South Park whenever I hear his voice!) can save this messy mish-mash of a film.

Next year I’ll just stick to re-watching the Jaws films instead of ever watching this weak supernatural slasher again!

Available from Amazon!
Posted by Sarah E. Jahier at 10:07 PM