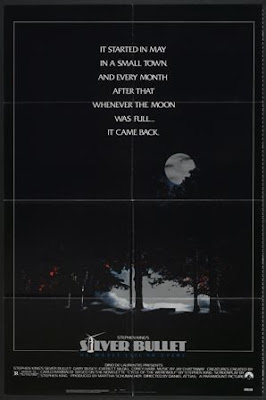 Ah, the nostalgia that a Stephen King work brings to me…his stories remind me of being in elementary school and devouring his novels. Of course, it also helped that I could identify with many of his characters, who were usually around my age in the books. I remember reading IT and then enjoying the movie on VHS (remember how it came with two VHS tapes since its 3 hour length couldn’t all fit on one?). Even though I didn’t really dig the ending of the film I loved the story and at the time was obsessed with actor Jonathan Brandis, so I pretty much wore out those VHS tapes. I enjoyed many of King’s other books and subsequent adaptations, but one (short) story I never read was Cycle of the Werewolf, which Silver Bullet is based on.

Silver Bullet is about young, wheelchair-bound Marty (Corey Haim) who lives in a small town with his family, including mom, dad, older sister and crazy Uncle Red (Gary Busey). He spends his days tormenting his older sister, hanging out with his best friend and best girl and tooling around in a tricked out wheelchair, courtesy of Uncle Red.

When the killer murders Marty’s best pal, drives his best girl and her family out of town and causes the town to cancel some firework festivities, he decides to take matters into his own hands…especially once he discovers exactly who and what the killer is. After convincing his older sister and Uncle Red, the three of them make one final stand against the monster on Halloween night.

Silver Bullet is a pretty decent Stephen King adaptation and a good werewolf film to boot! I really enjoyed how the main character was a kid and how this gave the film a sweet, nostalgic feel. The film may be rated R (there is lots of cussing and some gore), but I think it’s pretty kid-friendly and Marty is an extremely likable character you can root for all the way through. If you’re a kid you will have no problem relating to Marty and all the adventures he has (disabled or not) and if you’re an adult you’ll blissfully remember those carefree days as a kid (minus the werewolf…at least I hope so).

Corey Haim as Marty is the absolute star of the film and does a fantastic job in his role. His talent definitely shines through in this film and really makes you realize what a great actor we lost. Gary Busey is his usual scenery-chewing self in the film, but his boisterous Uncle Red gives the film a pleasant manic edge. And he’s got some of the most hilarious lines in the film (“Holy jumped-up bald-headed Jesus palomino!”).

The film does have a few instances of bloodshed (victims getting diced and sliced, some ocular horror, etc.) but gore is not the focus of the film, so don’t go in expecting too much (it’s kid-friendly horror, remember?). However, I did like the impressive werewolf transformation scenes, especially one set in the church. Sure, some of the prosthetics look a little rubbery or fake, but at least all practical effects are used…and I was expecting much less out of the film!

Silver Bullet is a fun and entertaining werewolf film that is definitely worth viewing. Haim and Busey’s performances give the film bite, but it’s also King’s nostalgic tone and the practical effects that make this underrated flick a must-see for all Stephen King and horror fans.