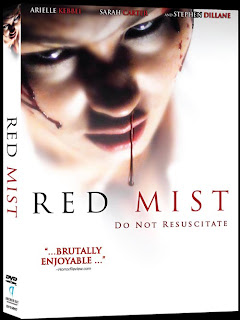 After loving Paddy Breathnach’s hallucinogenic and freaky Shrooms, I was excited to check out Red Mist, another film from the Irish director. In Shrooms, Breathnach combined many different horror tropes to create a very inventive and visually stylish film, something I hoped would be replicated in Red Mist. Breathnach does use familiar horror scenarios in Mist, but they are so cliché that the film is just a bore to sit through.

The story is about some stereotypical med students (the good girl, the goth, the bookworm, the asshole, the rich girl, the sensitive guy, etc.) who apparently think they are all still in high school because they pick on socially awkward stutterer Kenneth (Andrew Lee Potts). As in most horror films of this ilk, a prank goes horribly wrong and dear old Kenny ends up on a coma. No one wants to implicate themselves, so they decide to keep the secret within the group and not tell the police or hospital staff. The only one who seems upset over this decision and the overall situation is good girl Catherine (Arielle Kebbel), who feels somewhat responsible since Kenneth had a crush on her. She secretly pumps Kenneth full of experimental drugs that she hopes will pull him out of his coma…unfortunately all that awakens is Ken’s spirit and it’s out for revenge! Kenneth’s spirit begins taking over bodies and killing off the group one by one as payback for leaving him in a coma. Can Catherine stop Kenneth before she’s next?

I really wanted to like this movie since it was directed by Paddy Breathnach, but the more I think about it the more I dislike it. It just felt so generic and predictable, not to mention how silly the premise was. I mean, a coma patient’s spirit possessing others’ bodies and killing people for revenge? Really??? The story just kinda plodded along, and while the direction was competent the film just couldn’t keep my interest, especially with some gaping plot holes (since when can med students pick up any drugs they fancy in the hospital pharmacy?). The film tries to combine elements of a slasher movie, medical drama and possession tale but here the combo just doesn’t work. While the clever combination of sub-genres worked in Breathnach’s Shrooms, here it just feels trite and lazy.

Besides the snooze-worthy story, the characters are pretty unlikable. They try to give Kenneth a tragic backstory, but it never really goes anywhere and the opening scenes (which are quite horrifying and effective) are never really referenced again in the film. Plus, all of the other characters are stereotypes and even the final girl Catherine is bland, so there is really no one to truly root for. The acting varies from grating to annoying to tolerable, so it’s not like the actors make their characters any more likable.

To top it off, none of the deaths are memorable. One girl gets her head slammed multiple times in a car door, another gets her wrists slit open, one slams her head repeatedly against a mirror and stabs herself, a dude gets seduced and then gets Drain-O poured down his gullet, yada, yada, yada. Nothing to write home about.

The only positive thing about the film was the direction, which creates a surprisingly claustrophobic feel in such sprawling hospital. The lighting, believe it or not, is also very well done and while it’s not something I talk about in every film review I believe it bears mention here. However, technical details will not save a doomed film, and the fact still remains that there are better, more entertaining films out there besides Red Mist. Shrooms, for example!

Red Mist was a disappointing effort from director Paddy Breathnach. It’s just plain boring, too cliché and its premise is silly (but not in a good way). Furthermore it has shoddy character development and the acting isn’t what you would call Oscar worthy. It may have nice direction and technical details, but those alone don’t make a memorable film and already Red Mist is dissipating from my memory. Skip it.

Available from Amazon!
Posted by Sarah E. Jahier at 11:00 PM