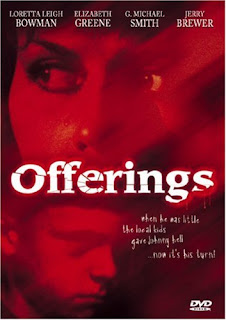 While all these shenanigans sound like a grand old time, they are assuredly not!

The plot is an oversimplified mix of Halloween and Slumber Party Massacre. It begins with a young mute boy who is not only abused at home (how ‘bout some cigarette ashes in your eggs, honey?) but also by the neighborhood kids. His only friend is a little blonde girl who stands up for him. However, one day the other kids “accidentally” cause the outcast to fall down a well…and after that he spends the next 10 years in a mental asylum because apparently he also killed his mother. When 10 years are up, our young scrappy psycho breaks out by killing a few nurses and returns to his boyhood home. To reminisce about happy childhood memories, you ask? Why no, silly, he’s returned to hunt down all the bullies that taunted him and regale his little blonde girlfriend with “offerings” of their slaughtered body parts like ears, a nose, etc. It’s up to Little Miss Blonde, her BFF and the corpulent sheriff to find out how to stop the psycho before he kills again. At least so that the icky “offerings” will stop. They are like, totally groddy!

Yeesh, this is one sorry excuse for a slasher flick! Of course the filmmakers themselves have admitted to making this just as an excuse to party, but why did they have to subject everyone else to this awful film?

Ok, ok, so it does have its moments of hilarity, unintentional or intentional. Take for example, the funny tasting “sausage” pizza the kids have at Little Miss Blonde’s house. It turns out the mystery meat is the other white meat…human! Yum! How sweet of the psycho to send the kids some snacks before their untimely demises! Then there are the obnoxious Valley Girl accents used by most of the characters…yes way! Or how ‘bout the little kid busted for reading (a box of) naughty magazines and telling the dense cop his name is “Ben Dover” before running away and flipping the policeman the bird? Pretty amusing stuff…

…However, the rest of the movie (like the remaining 98%) just plain sucked! The storyline drags, the pacing is horrible and it is just…weird! Like the scene where one of the kid’s parents are eating cake at 3 AM…it’s just feels so off and out of place! The kills are pretty absurd too, including a cheesy vice kill scene. All of the kills (and most of the movie) leave a lot to be desired.

Offerings is a pretty crappy movie that rips off Halloween, Slumber Party Massacre and numerous other slashers, and while I can’t really recommend it, it does have its entertaining moments. Be warned – these moments are far and in-between, so watch at your own risk!

Available on Amazon!
Posted by Sarah E. Jahier at 7:35 PM