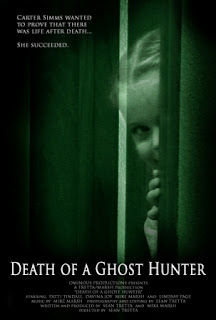 Ever since The Blair Witch Project there have been a plethora of “found footage” faux documentaries. Some are good while others are just groan-worthy. Can you guess which category Death of a Ghost Hunter falls into?

Death of a Ghost Hunter is about paranormal investigator Carter Simms (Patti Tindall) investigating a supposedly haunted house. The history of the house is that an entire family was slaughtered there, including husband, young son and daughter. Supposedly, when the mother discovered them all dead she blew her brains out because she couldn’t deal with their deaths. There have been reports of a haunting ever since this tragedy. The owner of the house, who has never lived there himself, tells Carter she will be joined by a few other people to help her document anything that occurs.

I wasn’t expecting much out of this movie, but the first half hour or so was actually pretty promising. We found out the whole cursed history of the house and one of the investigators (a 20-something church girl who was there to ensure the dead were “honored”) becomes especially affected by the surroundings. There is also a very creepy moment where the investigators discover something in their footage (a little hand gripping a doorframe and a small head slowly peering around – ya, it’s on the DVD cover) that made the hairs on the back of my neck stand on end!

However, this was the ONLY scary part of the film and the rest just went downhill from there. The other “ghostly” appearances were too obvious and the special FX looked lame. The best films make you believe something is there but either don’t show it or only show a peek, but in most of Death of a Ghost Hunter they show too much and it ruins the tense mood of the first part of the film.

Also ruining the mood were the many plot holes and plot inconsistencies. When the investigators found a bunch of incriminating photos I practically threw up my hands and said, “Right. Like the police wouldn’t have found those!” Or how the police couldn’t have figured out the killer from all the forensic evidence.

When the mood is ruined for the rest of the film I pretty much stopped caring about the characters. I thought the actors all gave okay performances, but their characters were written just kinda blah. A huge backstory wasn’t necessarily needed, but something that would make the audience relate to them would have been nice and perhaps make us care for them more.

To top it all off, the “finale” dragged on for far too long and really should have ended with the death of a ghost hunter (I’m not giving anything away, it’s all there in the title!). Instead, it was drawn out for another 20 minutes or so (all I know is that it felt like FOR-evvvver!). At this point I just wanted the movie to end, but it just kept going and going and going…

I will say that the “Jesus box” (a huge box with crucifixes all over it that is worn over the head and has an eyehole to see out of) used throughout the film and prominently in the end was pretty creepy.  However, that and the previous scare I mentioned do not make a good movie all on their own. This film was just riddled with too many pacing, storyline, character and mood problems to call it a good (or even okay) film. I understand the limitations of plot, but if they had stayed away from the cheesy ghost visuals (with the exception of that first scare) and beefed up their story a little bit and shortened the ending I think it would have made a much better film. As it stands, though, Death of a Ghost Hunter is a weak entry into the faux documentary subgenre.

Available from Amazon!
Posted by Sarah E. Jahier at 9:23 PM