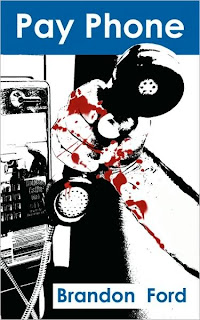 In Pay Phone, Brandon Ford’s (author of Splattered Beauty) newest novel, charming serial killer Jake stalks victims from his tenement, calling a pay phone he can see from his isolated apartment and luring victims up where they meet their grisly deaths. Jake may be a charismatic and handsome young man, but he is haunted and tormented by the voice of a mysterious woman named Susan.

One morning Jake spies a very special victim from his perch…one who looks almost exactly like Susan. Amazingly, she answers “his” pay phone and the two strike up a conversation. Jake learns her name is Chelsea and she is a struggling actress trying to make it in the big city. Jake thinks this one is different and that she may be able to stop him from his murderous ways, but Susan’s voice whispering in his head tells him different.

Pay Phone is a quick, easy and suspenseful read from indie author Brandon Ford. The characters, from the twisted Jake to innocent Chelsea to greasy landlord Ackley to Chelsea’s bitchy roommate Haley, are all fleshed out and given ample background, though this isn’t always necessary. For example, there is a sub-plot about Haley trying to sleep her way to the top of her company that doesn’t quite fit. Though Ford goes to great lengths to describe her anguish, her chunk of the story seems unjustified considering her abrupt leave of the story. However, it’s not like Haley’s subplot took anything away from the meat of Pay Phone, and her feelings of isolation, frustration and disappointment mirrored all of the other characters’ feelings and fit the tone of the book.

I also enjoyed all of the shocking and perverse revelations about Jake, his relationship with Susan and the grisly way he dispatches of victims. There are some very gory, explicit descriptions throughout the book, including necrophilia, which are sure to satisfy gorehounds and extreme fiction readers alike!

The pacing of the novel is quick, and Ford has the ability to suck you into the story and make you want to keep reading all the way through. The character of Jake is oddly likable, despite all the horrific things he does, and you just don’t want to stop reading about this psycho. Though there are some instances in the plot that aren’t entirely believable (it’s very convenient that Chelsea decides to pick up the pay phone – and who in their right mind would actually pick up a germ-infested pay phone? Ick!), but because of the breezy nature of the novel I was able to overlook the inconsistencies of the plot and just have fun.

If you are looking for a disturbing but quick horror read this summer, look no further than Brandon Ford’s Pay Phone…just don’t pick up if you ever hear a pay phone ringing; you never know who is on the other end!

Available from Amazon!
Posted by Sarah E. Jahier at 10:33 PM