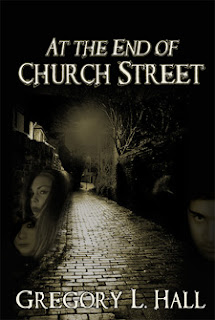 A group of homeless goth kids who run the back alleys of Orlando, Florida are being targeted by a vampire slayer who thinks they are real creatures of the night. Though the kids like to wear fake fangs and don black capes to terrorize the tourists, they are pretty much harmless and the only people to bother them are the bored cops. Now, Vampire King and Queen Adam and Lucy must protect their brood of runaways from a real threat that is staking and decapitating members. Everyone is a suspect, from a detective called Duncan to the kids’ strange butler Renfield and even some of the kids themselves. Can they catch the deranged Van Helsing-wannabe before it’s too late?

Gregory L. Hall’s The End of Church Street is a fast-paced, fun read that offers up plenty of interesting characters, from the level-headed Adam to the sensual Lucy to innocent newbie Lilith to hothead Timmy. Each character has a varied past and Hall takes the time to develop all the characters so they each have distinctive personalities and pasts, making us care about every single one. I also like how they weren’t just stereotypical cut-outs of either homeless runaways or vampire freaks, but were really varied in appearance and personality. Hall did an excellent job giving each and every one of the characters emotional depth to ensure they really resonated with the reader. I was really cheering for the kids to elude the killer!

As for the killer, I enjoyed how Hall kept the reader on his or her toes the whole way, and gave us plenty of red herrings! I was positive I knew who the killer was, but the reveal completely surprised me! Kudos to Hall for actually creating a solid mystery that was suspenseful and surprising. The book kept me guessing and therefore kept me interested!

I also enjoyed the theatrical settings of the old theatre where the vampire kids live and the local haunt where Adam works. Both locations really added to the atmosphere of the book. Besides those two spooky locations, the foreboding dark alleys also added much to the setting. Shadowy encounters in the alleys really made my hair stand on end!

The only thing I didn’t quite like about the book is that sometimes its characters have a tendency to fall into melodramatics. I suppose that since they are teens they are predisposed for drama, especially since most of them are goths, but sometimes they go a bit too far and the book starts to focus more on the tangled relationships between characters rather than the horror at hand. This occurs a couple times, but thankfully doesn’t detract too much from my overall enjoyment of the novel.

Despite this small complaint, overall The End of Church Street is a solid horror novel that kept me enthralled in its spell. It’s a perfect quick read that will keep you glued to its pages and has several twists and turns that are sure to surprise you!