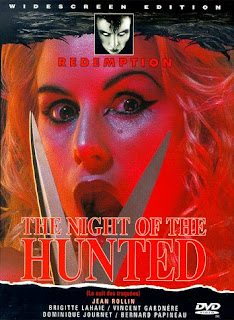 I love Jean Rollin films – usually. Their dreamy imagery contrasted against shocking violence usually makes for a memorable viewing experience (see The Grapes of Death, The Living Dead Girl, etc.). Even the French director’s more subtle and “tame” films, like The Iron Rose) have a certain charm that I find irresistible. However, today I’m sad to report that I’ve found a Rollin film I just couldn’t get into – Night of the Hunted. While it still boasts Rollin’s signature style (the usual gratuitous nudity and gore), I found Hunted to be a disappointing, boring effort.

Elisabeth (porn actress Brigitte Lahaie) stumbles out of the woods onto a darkened road to escape…something. Young Robert (Vincent Gardère) drives by and picks up the disoriented beauty, who has lost her memory and can’t remember what she is running from or even who she is. Robert takes her back to his apartment in Paris, the obligatory “bow-chikka-bow-bow” happens (in a very long scene, I might add) and the next morning Robert leaves her there and goes to work. A man claiming to be Elisabeth’s doctor and his assistant kidnap her and take her back to a hospital housed in a towering skyscraper where she joins other zombie-like people who’ve lost their memories. Elisabeth vows to escape with Robert’s help, but in the meantime other patients start lashing out, with murders and lots of awkward sex occurring.

Gone is Rollins’ stylish imagery and replaced by a cold, institutionalized setting. Not even the gore is eye-popping since it is set in such a bland place. Sure, there is tons of nudity (full-frontal, both male and female), but the unattractive cast make it a chore to sit through and the sex feels vanilla, especially for a Rollin’s flick. The film just feels too sterile and constrained by its setting to ever achieve anything truly great and gets bogged down by a lackluster story and slow pace.

Not one of Jean Rollin’s best efforts, Night of the Hunted is only recommended for hardcore Rollin fans…and even then with trepidation.

Available from Amazon!
Posted by Sarah E. Jahier at 11:28 AM