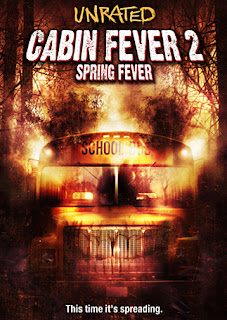 It’s never a good sign when a director quits a production half-way through, which is exactly what happened with Cabin Fever 2: Spring Fever. Director Ti West (The House of the Devil, The Roost) just didn’t agree with the direction the studios wanted to take the film, so he bailed on the production. He was never replaced and the film was completed without a director. Usually, this spells disaster for a film, but Cabin Fever 2 still managed to be surprisingly entertaining!

This silly and fun sequel bears no resemblance to Eli Roth’s great Cabin Fever (which, for the record, I love!). First off, instead of an isolated cabin the location has been moved to a crowded high school. Secondly, the tone is totally different. Gone is the tension and suspense from Roth’s flick as it’s replaced with funny gross-out gags and outrageous gore. In fact, it helps to think of this sequel as a whole different story, because besides the flesh-eating virus it really doesn’t feel or look like the original!

The film picks up right where Cabin Fever left off – Rider Strong’s character has escaped the cabin in the woods only to realize he still has a very short shelf life. Meanwhile, the contaminated water containing the flesh-eating virus is bottled in a plant and shipped off to the local high school, which is gearing up for their prom. The prom ends up being ground zero for a whole new epidemic as the teens meet all kinds of nasty fates while the military quarantines the whole school. Can anyone make it out alive?

While I expected this sequel to be downright awful, I was pleasantly surprised by its energy, quirkiness and gore factor! If you like gross-out gore shocks, you are going to love Cabin Fever 2: Spring Fever! There is copious vomiting along with buckets of blood, sores, pus, infected private parts and lots of ooey gooey ickiness! The action is completely over-the-top and every few minutes I found myself saying “ewwwwww” or “grossssssssssss”!! It’s not easy to gross me out but this film definitely did the trick!

I also enjoyed seeing the familiar faces of Giuseppe Andrews as party-hardy Sheriff Winston and the brief appearance from Rider Strong, both from the original! Other recognizable faces included Marc Senter from The Lost and Noah Segan from Deadgirl. The characters weren’t too terribly annoying, and I was actually rooting for the lead characters!

It’s too bad Ti West walked away from this film, because it’s buckets of mindless fun! It may not resemble the original at all, but it sure is an entertaining way to be grossed out!

Available on Amazon!
Posted by Sarah E. Jahier at 2:22 PM