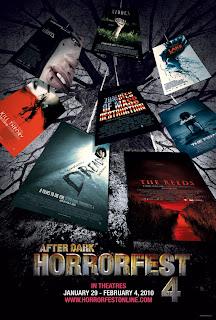 I finally got around to checking out all of After Dark Horrorfest’s “8 Films to Die For” since they were only in theaters for two seconds!

I don’t feel like writing a lengthy review for each film, so I’m going to do a quickie review of each and list them from best to worst.

Note: All synopsis are courtesy of Netflix. Yeah, I’m lazy like that sometimes.

1.) Hidden (aka Skjult)- Kai Koss (Kristoffer Joner) returns to his family’s eerie woodland estate and makes plans to sell the house, hoping to put the memories of his tragic childhood behind him. But a presence even more wicked than his abusive mother has taken up residence in the place. Pål Øie (Dark Woods) writes and directs this atmospheric horror flick from Norway. Karin Park, Arthur Berning and Bjarte Hjelmeland co-star.

Definitely the best of the bunch, Hidden’s atmospheric story was intriguing, mysterious, and, best of all, scary! The psychological thriller is methodically paced and offers plenty of twists and turns. It is also gorgeous to look at (the creepy house, the weird, woodland-themed hotel, the eerie woods)! I also enjoyed how it is a mixture of haunted house/ghost/serial killer/slasher themes and makes you think. If you like subtle horror that slowly gets under your skin, Hidden is for you!

2.) Lake Mungo – When a series of inexplicable supernatural events strikes their home, Russell (David Pledger) and June (Rosie Traynor) Palmer try to figure out exactly what is behind the tragic drowning death of Alice (Talia Zucker), their 16-year-old daughter. A psychic (Steve Jodrell) might be able to help them. Joel Anderson writes and directs this psychological thriller; Martin Sharpe, Scott Terrill and Tamara Donnellan co-star.

Another methodically paced spookfest, Lake Mungo plays like a faux docu-drama where family members, police, doctors, neighbors, etc. are interviewed about the drowning death of Alice and subsequent home video is shown that appears to capture Alice’s ghost. The spook-factor comes from the fact that this film feels so real and offers some definitively creepy grainy video evidence of a haunting. The film loses some steam after a twist towards the middle, but the creepy images will haunt you for days!

3.) The Graves – When sisters Megan (Clare Grant) and Abby (Jillian Murray) Graves go on a road trip before recent college graduate Megan starts a job in New York, their fun search for a silly roadside attraction turns into a nightmare after they stumble into evil Skull City. The supernatural residents of this abandoned mine town like to rip out visitors’ souls, and after Megan is badly wounded, Abby must fight to save them both in this bloody spine-chiller.

While the two previous films are subtle and psychological horror, The Graves is straight up survival horror as Megan and Abby try to survive the nasty residents of a former mining town. This is a fast-paced and entertaining film, especially since the two lead female characters are so strong and a joy to root for. However, it does become a bit repetitive after a while (they keep running and hiding) and it would have been nice if the townsfolk were a bit more developed. However, it’s a fun flick that doesn’t disappoint!

4.) Kill Theory – A celebratory vacation turns into a nightmare for a group of recent college graduates when a sadistic sociopath forces them into a horrific game: They must kill each other off until only one survivor remains. As tensions grow and the murders begin, relationships falter and new alliances are formed. Chris Moore directs this gory slasher flick that stars Agnes Bruckner, Taryn Manning and Patrick Flueger.

Though this sounds like a stereotypical slasher, it actually has some tricks up its sleeves and turned out to be pretty entertaining. It has an interesting premise that it follows through with until the end and even throws us for a loop with a nice twist! It does have its “meh” moments, but overall Kill Theory turned out a lot better than I expected it to.

I was really looking forward to this film, especially since it was adapted from a Clive Barker story. However, I found it kind of boring and meandering. I lost interest in the film pretty quickly and was disappointed in its predictable story and ending. However, I will say that it has one of the best (worst?) scenes of torturing a vegetarian ever! The vegetarian is locked in a room and will starve unless she eats a hunk of groddy meat left in her cell. As a vegan, this scene definitely skeeved me out! However, that was the only scene that really “got” me…the rest of the film was pretty blah.

6.) The Final – Dane (Marc Donato), an unpopular high school student, leads a group of outcasts seeking revenge on the popular kids who harassed and humiliated them for years — and their plan includes gruesome forms of torture learned in history class and horror films. Confining the bullies at the remote house Dane inherited, the outcasts turn the tables and subject their victims to a night of grisly treatment in this gory horror flick.

Ya know, this film didn’t start out so bad, but after a while it just felt like a high school version of Saw. It definitely needed more character development of both the popular (victims) and unpopular (killers) kids. It really went downhill when the characters we are supposed to identify with, the unpopular kids, turn into the bad guys and start killing indiscriminately. When that happened I didn’t have anyone to root for or identify with so I was pretty ambivalent for the rest of the film. The set-up of the costume party to get revenge on the popular kids was pretty clever, though, and made for some great scenes! Too bad it went downhill after about 30 – 45 minutes. FAIL!

I just could not get into this movie and was bored all the way through. I don’t know what it was but it didn’t engage me at all. It just felt like any other zombie movie except with two gay dudes in it. I guess I was expecting it to be funnier or something, but I can hardly remember this film at all. Pass.

8.) The Reeds – When a group of London friends boating through Norfolk Broads takes a wrong turn in the dense, reedy waters, they find themselves haunted by a terrifying and ancient evil in this eerie spine chiller directed by Nick Cohen. It soon becomes apparent that they’re no match for the malevolent forces that lurk in the vast waterway. Eli Marienthal, Scarlett Alice Johnson, Geoff Bell and Emma Catherwood star.

The bottom of the barrel is The Reeds, which just feels unoriginal and that you’ve  seen the same movie 100 times before. It boasts a few gross-out/spooky scenes (the scenes of the burned dog were sick), but overall the story is just weak and didn’t keep my interest. Even the “twist” at the end was predictable. I think I even started doing chores while this was on because I was so bored. Definitely pass!

Order the box set on Amazon!
Posted by Sarah E. Jahier at 2:55 PM