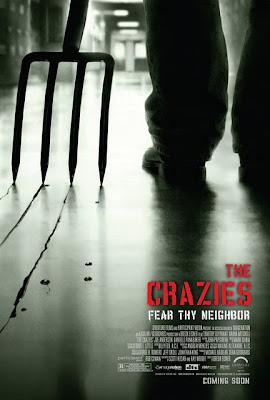 I’ve never been a big fan of George A. Romero’s 1973 film The Crazies. I’ve probably only seen it a few times and remember being very underwhelmed by the horror flick. I understand its message and significance, and while I appreciate a good socially conscious film, the original Romero film just didn’t grab me and was largely forgettable.

So, I wasn’t too excited for the 2010 remake, helmed by Breck Eisner (same dude who is in discussions to direct remakes of The Brood and Creature from the Black Lagoon…ugh, it never ends! He also directed an episode for Fear Itself). I saw The Crazies reboot when it was released on DVD last week, but it has taken me this long to write a review since the remake, like the original, left me feeling pretty “meh”.

A military plane crashes in a small Midwest town and releases a secret biological weapon into the town’s water supply. As people become exposed they become gravely ill, ultimately descending into homicidal madness. Soon, the military quarantines the town to contain the virus at all costs. Sheriff David Dutton (Timothy Olyphant), his pregnant wife Doctor Judy Dutton (Radha Mitchell) and a few other uninfected inhabitants attempt to escape, but who can they trust when anyone can be infected?

This remake doesn’t really try anything differently and is pretty much the same film as the original except it looks more slick and polished. It starts off pretty strongly (a man holding a gun stumbles across a baseball game, a mad look in his eyes, as Sheriff Dutton pleads with him to put the gun down – a scene you’ve undoubtedly seen in the trailer), but after the characters and plot are established the story begins to wear thin and the proceedings become pretty boring.

However, the film also has its positives. For one, the acting was pretty decent. Timothy Olyphant and Radha Mitchell do a good job as the married couple, though their chemistry felt a little off at times. And dang…Olyphant looks mighty fine in that police uniform! Joe Anderson who plays the deputy also gave a strong performance, especially towards the end. Everyone else in the cast did a good job, so not many complaints from me regarding the acting.

I also thought the special effects were quite good and the “infected”, with bloodshot eyes, sores erupting on their faces, their blank-eyed stares, looked great! There is a scene at a truck stop where a few groddy infected attack the Sheriff and his wife that is VERY effective and actually made me jump! The film isn’t gore-focused, but has its fair share of bloodshed. One memorable scene that comes to mind is the pitchfork scene where a “crazy” kabobs a victim with the implement.

Saying all that, I was still bored watching the film. A few good scenes do not a movie make, and while The Crazies isn’t a horrible, dumbed-down remake like most horror “reimagings” are, I was still managed to be let down. The story is just too familiar, not only because it’s a remake, but because we’ve seen virus/quarantine movies so many times before…and yet films like 28 Days/Weeks Later and [REC] actually managed to keep me from falling asleep while watching them, something I can’t say for The Crazies.

Saying The Crazies is one of the better horror remakes out there really isn’t saying much, and while The Crazies is better than most reboots coming out of Hollywood,  it still failed to entertain me.

Watch at your own risk!

Available from Amazon!
Posted by Sarah E. Jahier at 9:40 AM